Karaoke fans will soon get the chance to turn their iPhones into full-fledged karaoke machines, thanks to an upcoming new application called iOKi. This is no wannabe karaoke app either — music sensation Lady Gaga has partnered with iOKi to launch her own fully Gaga-ized version of the app featuring some of her most popular songs, which will make its debut alongside the upcoming release of her new album on November 23.

iOKi is looking to become the definitive karaoke experience on the iPhone. Instead of slapping some lyrics on low quality MIDI files (as lesser apps have tried), iOKi has actually worked with all of the major labels to license their content. I spoke with the iOKi founders Les Borsai and Elias Manousos who outlined some of the complicated rights issues involved with karaoke. Suffice to say, it was no easy task, but they think it will also make it hard for competitors to encroach on iOKi’s territory in the future.

Using the app is pretty straightforward: you choose a song, and the app launches into its viewing mode, where the lyrics pop up on your iPhone screen just as they would on more tradional karaoke machines. Depending on your setup, you can have the backing music and vocals come from either your phone’s headphone jack or its built-in speaker (your vocals can go in through either your headphone’s built-in microphone or the phone mic). The interface is easy enough to figure out within a few seconds, though I think it looks a bit bland given the iPhone’s penchant for glossy things. Once you’ve recorded a song, the app will present you with a link that you can use to share your recording across the web. 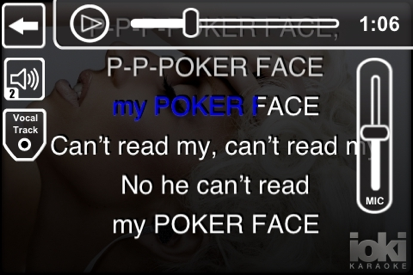 iOKi is launching its Lady Gaga themed app on November 23 at a $4.99 pricepoint, which will come with five of the artist’s songs including Poker Face and Paparazzi. Each of these songs will be generated from the original master recordings, rather than the sound-alikes that are common in the karaoke business. The app will also include access to an integrated store that includes over 3,000 songs available for 99 cents apiece from bands ranging from the Backstreet Boys to Van Halen (the company says they’ll soon have over 10,000 songs). Many of these are from soundalike recordings, though some of them will be based on master tapes as well. A few weeks after the Lady Gaga launch iOKi will release a more generic version that’s focused on the store. 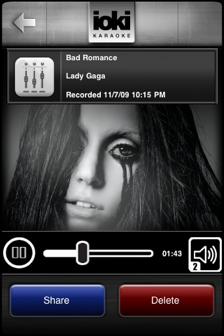 iOKi is clearly looking to tap into the success of other music-themed hits on the iPhone like Smule’s I Am T-Pain, and Tapulous’s Tap Tap Revenge, and it looks like they may have a winner on their hands. The company was initially inspired to go into karaoke after Manousos noticed that a Jason Mraz karaoke song has been viewed a whopping 2 million times. The team soon discovered that the karaoke indsutry is worth over a billion dollars, but that much of it is fragmented — consumers can purchase standalone machines, but they have to deal with purchasing specialized karaoke CDs, many of which are of poor quality (and sometimes don’t even have the proper license deals in place). The space is ripe for a shakeup.

The one picece of the puzzle that iOKi is currently missing is virality — the app actually stores your recordings on a server and lets you Email a link to your friends (you can also manually share this link on Facebook or Twitter). But for the app to really go viral, it should allow users to post their karaoke recordings directly to Facebook’s News Feeds. iOKi says that they actually have the infrastructure in place to support this kind of sharing, but that they still need to integrate Facebook Connect, which will be coming out in the first update. Fortunately the app may not need much virality at first, as Lady Gaga will be promoting it in the marketing leading up to her album launch.