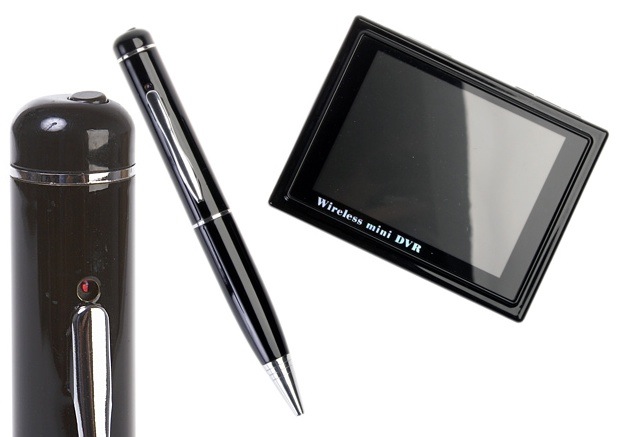 Boy, I remember the days of play spy gear in the past. Crappy motion detectors, fingerprint kits that were nothing more than flour and tape, and mirrored sunglasses — never anything like this. And I remember thinking, too, when Ethan Hunt had those camera-glasses in the first “Mission: Impossible,” I scoffed, thinking yeah right, there’s no way. Now, a mere decade later (actually that’s quite a long time, but bear with me), you can get one for pocket change. And by pocket change I mean quite a bit of money. And by quite a bit of money I mean $150, which really isn’t that bad.

The pen has a pinhole camera, as you can see, which shoots at 640×480. The monitor is actually a fully functioning PMP, with support for a million formats (the controls are on the side; it’s not a touchscreen device) and has an SD slot and built-in speaker. I’m assuming it can record the video from the pen-cam, though that’s not specifically stated.

I know, I know, there are lots of these sorts of things. But this one looks solid, and $150 is a pretty good deal. Brando’s got lots of great stuff like that.