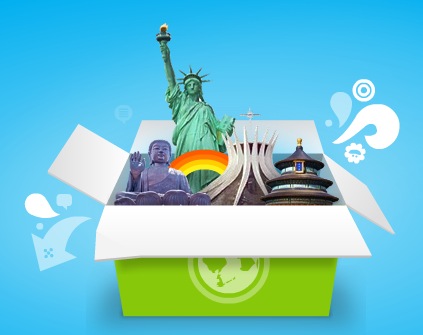 “Wait, what the hell… this isn’t what we ordered. It’s just a big box full of users with the word ‘Skype’ written on the side in Sharpie – none of the core p2p technology is in here.”

“What? Didn’t you read the description before you bid on it?”

“I guess not. I just got carried away with all the excitement.”

“Man, we have to stop buying stuff on the Internet.”

Long overdue settlement of the week: eBay and Skype
Last week, after four years of hilarity, the mess of eBay’s purchase of Skype was finally cleaned up. As TechCrunch (and everyone else) reported, eBay and a consortium of investors have reached a settlement with Skype founders Niklas Zennström and Janus Friis to gain control of the P2P technology that the service runs on, but which idiotically didn’t form part of the original sale. The settlement clears the way for the consortium – comprising private equity firm Silver Lake Partners, Andreessen Horowitz and the Canada Pension Plan Investment Board – to buy Skype.

Robin Wauters provided all the details: The Skype founders are getting 14 percent of Skype back – plus a place on the board – for handing over the rights to the P2P technology as well as investing a ‘significant amount of capital’ of their own in the new company. The newly structured buyout group will buy 56% of Skype, with eBay continuing to own 30% in a deal valuing Skype at $2.75 billion. eBay is expected to receive approximately $1.9 billion in cash upon the completion of the sale and a note from the buyer in the principal amount of $125 million. Also, contrary to rumours, Index Ventures – an earlier investor in Skype – are playing no part in the deal.

While Robin was crunching numbers, Erick was sat down with Marc Andreessen to get a bit of color on the deal. And Andreessen didn’t disappoint, essentially framing the whole settlement as a gesture of goodwill on the part of the consortium who would have been “prepared to litigate” and build their own P2P technology if things hadn’t gone their way. “We assumed it would be a good idea to bring the founders on board and resolve all the issues, we are very pro-founder,”  he said – which in no way made him sound like a mafia boss who would hate to see anyone’s legs get broken.

So what next for Zennström and Friis? Back to Robin for the answer: “the latest venture they’re putting their weight behind [is] Rdio. The yet-to-launch digital music startup was first talked about publicly a couple of weeks ago in a New York Times article but we haven’t heard any further information about the startup.”

Let’s just say that the new version of Skype is going to have some freaking awesome hold music.

Continuing victory lap of the week: ScamVille’s dwindling population
Meanwhile, Arrington’s ScamVille victory went into its 16th lap, with Facebook promising to improve enforcement of its anti-scam rule, the story getting picked up by Time and Newsweek and Mark Pincus’ somewhat successful attempt to lead the way in removing scam offers from social games. But by far the biggest news was the replacement of Anu ‘shit, double shit and bullshit’ Shukla as CEO of Offerpal. She was replaced by George Garrick from Mochi Media who immediately admitted to the company’s mistakes and took down the majority of the company’s offers, promising to only reactivate those that were scam-free.

Ordinarily I’d take a moment here to feel sorry for Shukla. Sure she was architect of her own downfall, but it’s still never nice to see someone lose their job – particularly in this climate. And yet in a weird twist of coincidence Shukla wasn’t the only person to find themselves unemployed on Wednesday. On the very same day came an announcement by Don Dodge that he’d been laid off as Director of Business Development for Microsoft’s ’emerging business team. The contrast between Dodge and Shukla couldn’t be more pronounced. As Arrington wrote…

“All layoffs suck, but letting Don go is a huge mistake for Microsoft. He nearly single-handedly defends the Microsoft brand in a fairly anti-Microsoft developer and user community. For many people in the startup community, Don is the face of Microsoft. He travels constantly, speaking at events whenever he’s asked, and makes a big effort to give young startups the attention they deserve. This is a guy who gives a heck of a lot more to the community than he ever takes back.”

And for once, the commenters agreed, with Kimbal Musk summing up the majority view: “Don was a star. From his constant evangelism in the face of cynics, to closely working with start-ups to help them navigate Microsoft’s massive organization, Don was the ultimate ambassador.”

New scandal of the week: SnapNames comes clean
Having wiped millions off the value of the social gaming sector, Mike set his sights on an even dirtier target: the domain name industry. Last week SnapNames – the largest domain name auction company – admitted that one of their employees had systematically placed fake bids in order to drive up the final price of domains. Worse, the company was apparently totally complicit in this fraud, secretly reimbursing the employee’s costs whenever he accidentally won an auction. To SnapNames’ credit, they have now fessed up to the scam, and have offered full refunds (with interest) to anyone affected. But to their less-than-credit, they’re demanding that customers sign a waiver promising not to sue SnapNames before they get their money back. As Arrington puts it in a follow-up post, Apologies Shouldn’t Be Conditional, Especially When You Steal From Customers.

For the love of Godwin: Hitler good, Obama bad
Fighting his natural reluctance to write about Apple, MG grudgingly turned his attention back to the company’s bizarre inconsistency in deciding which apps to approve for its app store. The story began last month when Apple rejected the Someecards app for including e-cards which made fun of Hitler and Roman Polanski. This despite the fact that they approved the likes of Asian Boobs and the Upskirt app without hesitation. Someecards eventually caved and deleted the offending jokes.

All was calm and still, until last week when the company received an email from Apple ‘suggesting’ that they delete a Halloween-themed card with the punchline “Just double-checking that your Obama costume will involve a mask and not shoe polish.” The cost of ignoring this suggestion: deletion from the app store – a threat made all the more bizarre by the fact that the previous day Apple approved the full text of Mein Kampf for inclusion in the store, complete with it’s nifty swastika logo.  Seriously, Mike Godwin would be spinning in his grave. If he were dead.

But all’s well that ends well – a few hours after Someecards got their email from Apple, they received a call from Google, wondering if they’d like to produce a version of the app for Android. The selling point? There would be absolutely no censorship of the cards. Hurrah! Bring on the Polanski hilarity!

Commenter of the week: Meta tag-team edition
There really is no way to include one of your own posts in a run-down of the best of TechCrunch without appearing gauche. And yet given the furious reaction last week’s NSFW column prompted from some commentors and commentators, I don’t really have much choice.

In case you missed the column (you’re forgiven), in it I discussed the solider at Fort Hood who tweeted from inside the base during Thursday’s massacre – including posting a twitpic of a victim. I concluded that her actions were further evidence that social media is encouraging us to put ego before humanity. I didn’t expect everyone to agree with my conclusions – and sure enough the disagreement ran the gamut from the insightful and reasoned (both Mathew Ingram and David Quigg took me to task splendidly)  to the batshit insane (hat tip to the commenter who hoped I develop ‘ass cancer’ and the one who insisted that the shootings – carried out by a Muslim soldier – were the work of ‘the Jews’).

But even the ass cancer guy pales into relative sanity when compared to the reaction from the poster-child for nominative-determinism that is Dave Winer. I can’t bring myself to dignify Winer’s post with a proper response (or even a link) so I’ll just link to this great rebuttal posted by MG on his personal blog.

What I will say is this: for accusing me of faking my concern for the death of innocent people just so that I might drive a bit more traffic and a bit more money to TechCrunch, you, Dave Winer, are my Commenter Of The Week. Congratulations! Now – and trust me when I say I have never meant anything as sincerely as this – go fuck yourself.

Best of the rest, of the week: Five links you mustn’t miss:
Let’s end on a lighter note, shall we? With five more posts that you really should have read last week…

Tudou: A Push Towards Mobile Video and Profits
Sarah Lacy returns from China, only to find that the founders of one of the country’s largest video sites have followed her back, bringing with them some interesting news.

Marissa Mayer Chosen As A Glamour Magazine Woman Of The Year
As Leena puts it – What’s not to love about a successful and geeky coder who also loves to wear Oscar de la Renta, Chanel and Armani?

Judge In Google Book Settlement Case Says Photographers Are Not Authors
Erick reports on the latest twist in the ongoing settlement talks between Google and book authors.

Think The Droid Launch Was A Let Down? Not So Fast
Jason returns to his local Verizon store, continuing his quest to find out just how popular the Droid is.