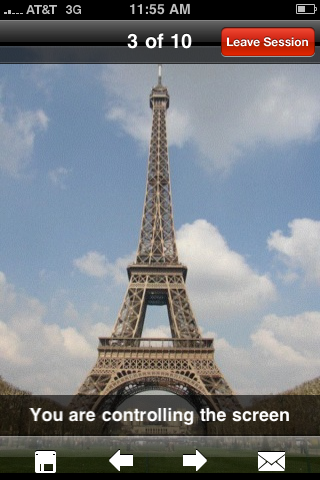 As we were all painfully aware, it took AT&T forever to bring MMS to the iPhone. A new app has just been released that hopes to one-up it.

Knocking, made by Pointy Heads Software, is basically a photo-sharing app on steroids. With it, you can pretty much instantaneously share up to 100 photos at once between two iPhones. This works by establishing a connection between the two phones, during which one user selects another user with the app and “knocks” the pictures over to them. The video below shows just how simple and fast this process is.

Naturally, for this to work, both people must have the Knocking application. But the app, which is free for the first 50,000 downloads, has other advantages, such as being able to control the photo viewing experience on another phone. So, for example, if I want to send some pictures to my mom and show her specific ones, I would simply create a Knocking connection and send them over where I could then control which ones she is seeing. She would also be able to save any of those pictures to her phone with the click of a button.

MMS allows you to send multiple images but the sending process is slow, and the selection process is cumbersome. With Knocking, you can easily share entire albums, not just individual pictures. And MMS limits you to sending 5 pictures. Again, Knocking’s limit is 100. And even with that many photos, it takes only a couple of minutes to sync them all between the two phones.

There is also Facebook Connect integration to allow users to share their “knocks.” And Knocking works over both 3G and WiFi.

You can find the Knocking app here. Again, it’s free for the first 50,000 downloads.