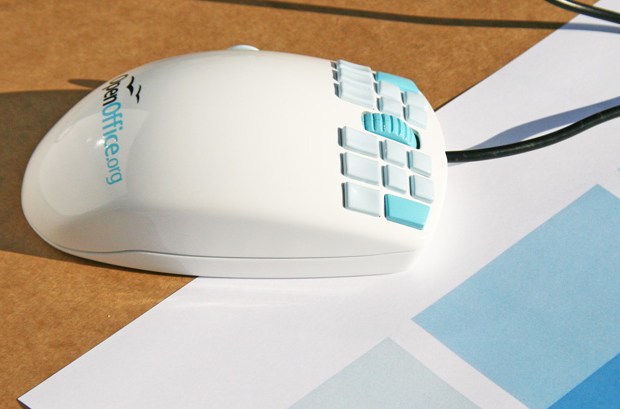 You may recall our incredulity when SteelSeries announced their 15-button MMO Mouse. Not one to be passed by, Razer shortly thereafter came out with the 17-button Naga, which we’ll be reviewing soon. But unknown to them, a small team was working in obscurity to create an 18-button mouse… with an analog stick for your thumb, to boot.

The OpenOfficeMouse, or OOMouse, isn’t exactly the most attractive piece of hardware, but its creator claims that “16 buttons divided into two 8-button halves were the maximum number of buttons that could be efficiently used by feel alone.” I guess if you take the thumb out of the equation with the analog stick, which Razer nor SteelSeries had the wherewithal to do, that’s probably true. They’ve set up profiles to make the OOMouse work with WoW, 3D Studio Max, Firefox, and many others — including, of course, the whole OpenOffice suite.

Personally I’m not a mega-mouse kind of person; ergonomics are far more important for me considering the amount of mousing i have to do, which is why I’m considering the Microsoft Natural as an alternative to the G500 and Mamba, which I switch between to keep things interesting. And while this OOMouse may look ridiculous, I’m sure there are some people who will find it a joy.