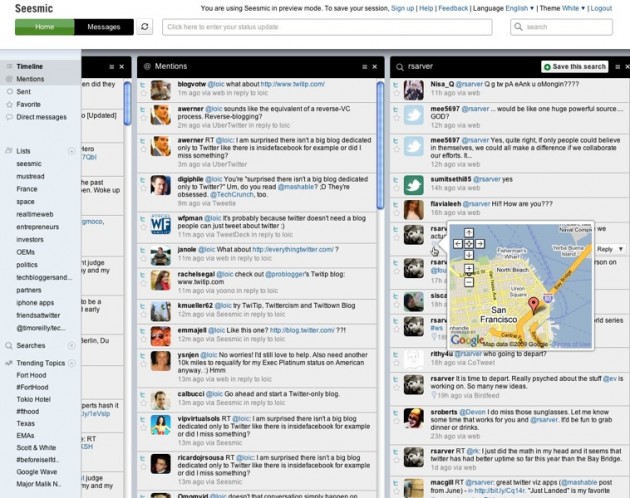 Earlier this week, Seesmic rolled out support for the new Twitter Lists for its Desktop client. Today, that same functionality comes to its web-based client. And with it comes a bonus: Geolocation support.

Now, to be clear, most users still won’t be able to use this geolocation support just yet, as Twitter has yet to enable it for most users. But if you do happen to have it, Seesmic supports it. As you can see in the screenshot, it looks pretty nice. If you see a little location marker on a tweet, you can hover over it to bring up a Google Map overlay showing where that tweet was sent from.

Last week, we previewed Tweetie 2.1, which will include geolocation support as well. Seesmic’s method looks like it may be a bit easier since it only requires a hover state to get to a detailed map of where the tweet was sent from, whereas Tweetie 2.1 requires two clicks (to the tweet and then on the tiny map to get a more detailed version).

Meanwhile, List support looks solid in Seesmic Web as well. As you can see in the other screenshot below, when you hover over a Twitter username, you have an option to add them to one of your Lists. Another web-based Twitter client, Brizzly, rolled out it support for Lists last night. The plan is to have all Brizzly “Groups” (a feature that worked like Lists) synced with Twitter Lists by tomorrow. Presumably, Seesmic will have its lists synced with Twitter Lists tomorrow as well.

It’s not yet clear when Twitter will do a wide roll-out of its geolocation support, but with several third-party services looking ready to go, it seems likely that it will be realatively soon. Following Lists full launch last week, Twitter has also begun testing its new Retweet funtionality to a small set of users.

Along with Lists and geolocation, Seesmic Web has a new Trending Topics area it is rolling out today as well. 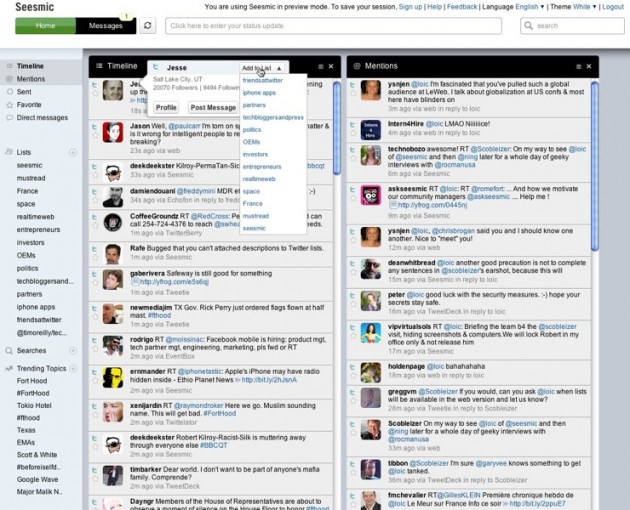