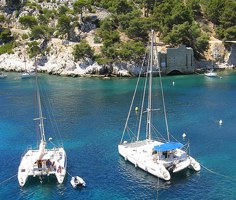 More good news for Indian entrepreneurs! Infosys co-founder and chairman N. R. Narayana Murthy’s new VC firm, now called Catamaran Venture Fund, just added a whole lot more money to its coffers. A few weeks ago, we reported that Murthy was turning to “the dark side” after selling a large amount of company shares in order to set up a venture capital firm. To set up the fund, Murthy reportedly sold 800,000 shares, or 0.13 percent of the company, its total value converting to $38.7 million, more or less.

It appears that Murthy’s wife, Sudha Murthy, who reportedly put up the seed funding for Infosys Technologies at its founding 30 years ago, has sold 2 million shares worth of her Infosys stock, worth roughly $91 million dollars. And Sudha sold 22 percent of her personal holding to fund her husband’s new VC fund.

The Catamaran Venture Fund will have a total of around $130 million dollars to invest with and will focus on early stage and angel investing. As we wrote in our past report, Murthy aims to invest mainly in ‘brilliant’ Indian entrepreneurs who found startups that operate in the areas of healthcare, education and nutrition, which may include technology-related companies.

Murthy started Infosys with six others back in 1981 by borrowing INR 10,000 (roughly $215 today) from wife Sudha. Infosys went public 12 years after its original founding and its share increased three thousandfold over the next 15 years or so. While Catamaran’s fund is still small compared to the war chests of other VC firms like Battery Ventures and Sequoia Capital, it still has the potential to make some very meaningful investments.

(Thanks for the tip, Jason)