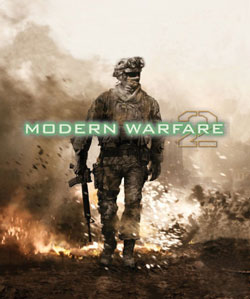 Everyone knows that Call of Duty: Modern Warfare 2 is almost here and just like every other epic game, its launch is covered in a haze of controversy. It seems like every day people find something else to bitch about the upcoming shooter. First, there was the lack of dedicated server support that got PC gamers riled up. Then a clip surfaced showing that *gasp* you might kill civilians. (GTA, anyone?) But it goes on: price gouging, multiplayer limited at 9v9, and online retailers boycotting because of Valve’s Steam or something like that.

But am I the only one that have dismissed all these complaints because of Infinity Ward’s track record? Look at the history here, the Call of Duty franchise is among the very best FPS ever made and Infinity Ward was behind every major PC and console release. The Call of Duty games have never let me down in the past, and I doubt this one will be any different. 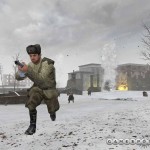 Do you remember the original Call of Duty? It was epic. Finally you were’t alone on the battlefield, instead fighting alongside fellow solders. You played as a solder from the American, British, and Soviet armies. The American campaign was almost a take on the Band of Brothers’s HBO mini-series. But it was the Soviet level where you had to defend the multistory apartment building from all angles that defined the game. It has to be one of the hardest and most complex FPS levels of all time.

Not only did Infinity Ward use the Quake III engine to give the game great graphics, but the story was deep and involved. I expect no less from Modern Warfare 2.

Infinity Ward did the same thing with Call of Duty 2 by allowing you to play as four different solders in different battle campaigns. But it was the multiplayer in the second chapter that was stunning. The maps where huge and could support up to 64 players. It’s still a favorite at LAN parties I attend although everyone eventually gravitates to the sniper rifle and the room falls silent for hours as we all sneak around.

It’s Call of Duty 3 that takes a slightly different look. Don’t get me wrong, it’s still a good game, but it wasn’t nearly as grand as the previous two games. Infinity Ward didn’t develop this game, another branch of Activision did, Treyarch. COD3 was simply just another WWII FPS and, feel free to argue with me, not worthy of the COD name with game play that boarded on tedious and boring. 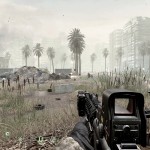 But the Infinity Ward release of Call of Duty 4: Modern Warfare by far made up for COD3. I don’t think I need to go into just how awesome the first player and multiplayer modes are on this game. You probably already know as everyone has played it. It overtook Halo 3 as the most played Xbox 360 online game of all time and became a favorite of PC gamers because it’s so easy to play pirated versions online.

Its success is the reason Infinity Ward and Activision is getting so much flack over its sequel. All die-hard players want is updated graphics, new maps, and slightly different weapons. I don’t blame them, they don’t want their favorite game to change dramatically. I was the same way with the Half Life mod, Day of Defeat.

Infinity Ward has different plans though. From what everyone can gather, this release is going to be different from the previous game. Dedicated servers aren’t going to be available, which doesn’t sit well with online gamer clans and people hoping to play on cracked servers like in the original. It just so happens that these dedicated gamers are vocal online and so causal gamers have been carry a picket line fence too even though they probably won’t notice a difference in game play.

Yet none of the complaints seems to bother me although I consider myself on the edge of being one of those dedicated gamer. I really think it’s because I enjoyed the hell out of each of Infinity Ward’s Call of Duty releases too. Every single one of them is on my top 10 list of best video games of all time. Modern Warfare 2 might very well be a disgrace to online PC gaming, but I’ll wait the couple of weeks and decide that myself before. Infinity Ward has earned that trust.

It’s easy to jump onto an Internet bandwagon, but when you really think about it, Modern Warfare 2 is just another stupid video game. If you boycott it because it doesn’t support 24v24 multiplayer or clans, the game will still go onto sell a bajillion copies and you’ll miss out on all the fun because you’re carrying the banner of some random gamers’ forum. I guess everyone needs to fight for a cause sometimes, but I’d be damn to let it get in the way of me playing what could be a great game.