If I had one of these things, I’d never get any work done. Unless I was a rally driver, in which case I’ll I’d be doing was work, work, work. Unfortunately (in this case at least) I’m just a blogger, so I don’t won’t be getting paid for zooming around the mountains in a cross between a tricked-out Subaru and a snowtank. Yes, I know there’s no such thing as a snowtank, but you know what I’m talking about. 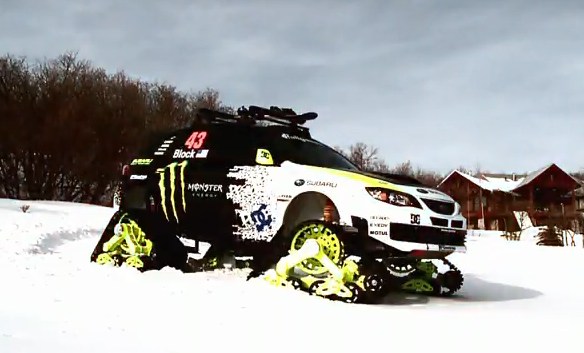 This beast isn’t exactly unprecedented (they need vehicles like this to get around at resorts, for filming, etc) but it is reportedly the fastest one out there. And once you get over the weird look it has (triangle-wheels) it’s actually pretty attractive.

Incidentally, there need to be more snow-racing games. Driving down a freaking mountain, there’s something you don’t get to do in real life. No more “Need For Speed” on regular streets. I want to drive down the Matterhorn, people!