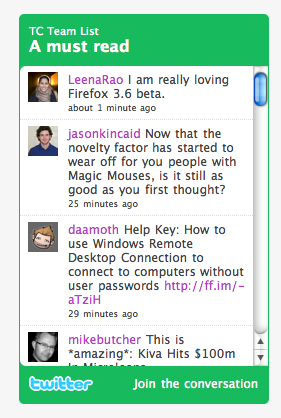 Since it was turned on for all users late last week, everyone is talking about Twitter’s new Lists feature. Most people seem to like it, but some have no idea what it’s good for. Perhaps those people will understand a bit more about Lists potential with a new widget that Twitter has launched today.

The List Widget is exactly what you’d expect: A widget that you can place on your blog that displays a list of your choosing. One nice thing is that this can be a list you made or one any user has made (that is public). If you simply type in a user’s name, it will show their lists in a drop down menu. You then give the list a title, a caption, customize its look and feel, and you’re good to go.

But here’s why this widget is pretty cool: It basically is a way for you to create your own curated Twitter stream anywhere on the web. Obviously, you won’t be able to do things like tweet from it (though there is a reply button that comes up when you hover over a tweet — this directs you back to Twitter), but people are already making some great Twitter lists (like us and Scoble) and this is a great way to put them to work without having to go to Twitter itself.

You can choose how many tweets to show, set the intervals, hide hashtags — there are a good number of options. Best of all, these widgets offer something that Twitter itself doesn’t: Realtime auto-updating. Basically, this widget is kind of like a better, more customizable version of Twitter.com. 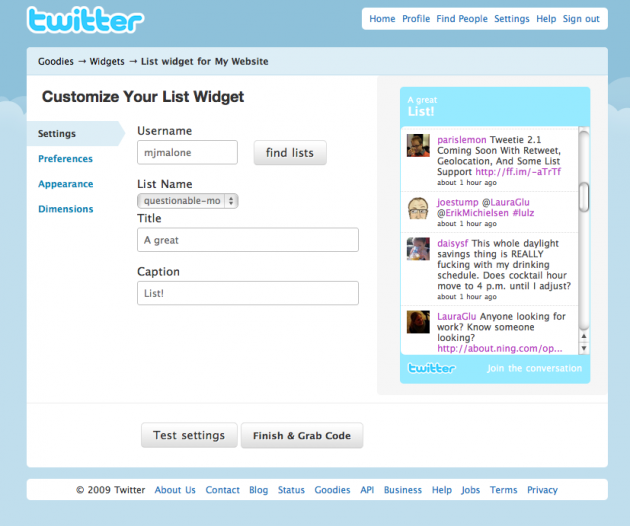