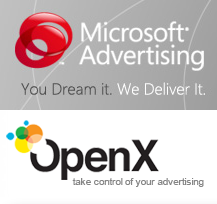 OpenX this morning announced it has entered into a multi-year partnership with Microsoft that will allow the companies to “cross-market and promote products” to their respective publishers.

Under the agreement, Pasadena-based OpenX becomes a preferred partner to publishers for enterprise ad serving solutions and has agreed to promote Microsoft’s Content Ads monetization products and eventual future products to its own roster of web publisher customers.

OpenX said that publishers usings its recently launched OpenX Market and Ad Server products will be able to use MS’s Content Ads, and that the Redmond software giant will refer potential customers to OpenX.

Financial details of the advertising tech partnership, which has been in trial since August 2008, were not disclosed. Microsoft’s director of advertising business development Peter MacDonald did tell Reuters there will be the opportunity for both companies to make money in the deal.

OpenX, interestingly based on open-source ad-serving tech, claims it works with more than 150,000 independent sites that collectively serve more than 300 billion ad impressions a month. The company – formerly known as Openads – is led by former AOL CEO Jonathan Miller (Chairman) and ex-Yahoo exec Tim Cadogan (CEO). The company’s backed by over $30 million in funding, most recently having raised $10 million from a host of venture capital firms.

OpenX competes with companies like Google (which owns DoubleClick) and, notably, Microsoft because of its own aQuantive product.