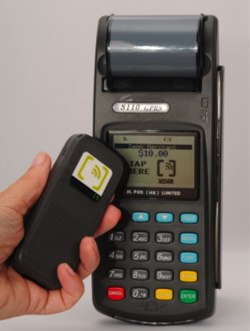 What recession? Startup Bling Nation just raised $20 million in Series B funding from Balderton Capital for a new cell phone payment system. This brings the startup’s total funding to $33 million since its launch in 2007.

Bling Nation’s ambitions are to establish a revolutionary and comprehensive payments system for physical goods. Here’s how it works. The company partners with local banks in super small communities in the U.S. (where the prominent bank isn’t Citibank or Bank of America). Banks will then offer the consumers who use their services a Bling Nation and “Bank” branded chip that can be stuck onto any cell phone device. The chip will allow any user to make a payment directly out of their checking account similar to a debit payment.

Bling Nation also partners with all of the local merchants in given town, to give them special “Bling Nation” credit card machines that will scan the chips. The payment device will calculate the number of times a payee has made a transaction and as an added bonus, will automatically award the user with coupons, points or discounts, which the merchant determines. The device will read the chip and deduct the money for a purchase out of the payee’s bank account. Bling Nation even allows merchants to implement a security feature, in which upon purchase, the customer will have to enter a PIN code for larger transactions.

Currently, Bling Nation is being used in two communities in Colorado, including La Junta and Woodland Park, which are both small towns outside of Colorado Springs. Bling’s CEO Wences Casares tells me that the device will be implemented soon in towns in the Northwest and Southeast U.S. And Bling is in talks with universities and military bases to implement its system.

Bling monetizes the payment network by taking a cut of each transaction, which Casares says is very small. The reason Bling’s device is attractive to merchants, says Casares, is because they can avoid costly transaction fees associated with credit card purchases. Even with the debit fees and the Bling’s cut, merchants end up paying 50 percent less in transaction fees than if the purchase was through a credit card system.