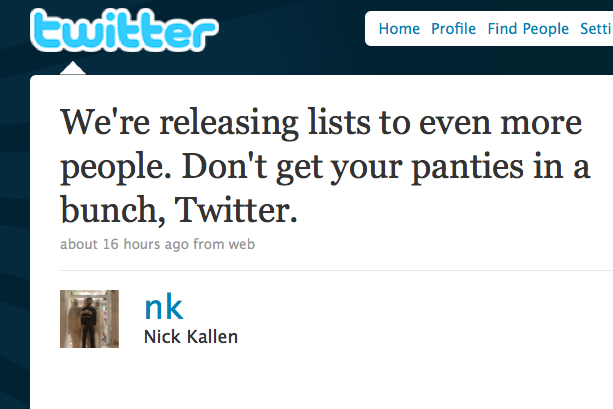 Ever since Twitter announced it is working on a new Lists feature a month ago, users and developers have been awaiting its broad rollout. Over the past few weeks, Twitter has been expanding the number of people in the Lists beta, but now it appears that a full rollout is under way.

As of yesterday, Twitter employee Nik Kallen reported that “25% of all users have Lists.” And then he Tweeted: “We’re releasing lists to even more people. Don’t get your panties in a bunch, Twitter.”

Judging from the what we are hearing from tapped-in Twitter developers, the buzz on Twitter itself, and our tip box, a full rollout is under way and is expected to be completed either today or tomorrow. (Remember, this is Twitter, so there are no guarantees).

Why is everyone so excited about these Lists? Finally, you will be able to create groups of people you follow on Twitter. So if there are 10 or 20 people who consistently deliver good Tweets, you can separate them out from the rest of your stream and just listen to them. Or you can create lists by topic, people you actually know versus people you only know via Twitter, or any other category. And the cool thing about these Lists is that once somebody makes a good list, other people can follow that entire list, which makes it much easier to get started on Twitter. Because finding interesting people to follow is actually a lot of work.

Has Lists been turned on for you yet?