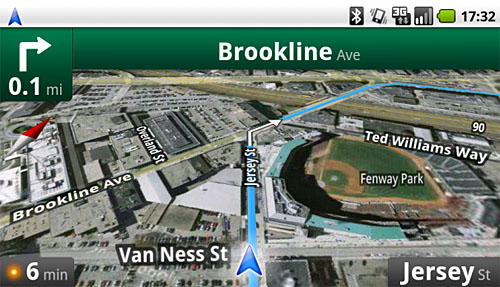 Alright, everyone, settle down. I know the Google Maps Navigation stuff is pretty amazing, but let’s not write off the traditional GPS makers just yet. They’re not going anywhere for a while. Your parents and friends will see to that.

Hopefully the sudden market loss that companies like Garmin and TomTom saw yesterday will wake the companies up and see that they are doing it wrong. They are in the habit of producing 78 different versions of the same GPS. Each model steps you up $20 and adds another feature. It’s a ridiculous business plan and totally opposite what successful companies are doing.

But it’s true. Google dropped a bombshell on GPS makers yesterday with it’s free navigation tool that trumps almost anything currently available. The Android 2.0 app is about as robust as you can get thanks to the always-connected Android OS and almighty Google. You can simply say “Where is the Best Buy in Flint, MI” and it will take you there. All this is free from the “Don’t Be Evil” company, Google.

TomTom has a cell phone navigation solution too. Except theirs costs $100 for the app and another $120 for the car kit and the whole thing isn’t nearly as powerful as Google’s offering. But there are others as well: Navigon sells an app for $100, TeleNav has one for $10 per month, and there are other no-name programs out there for around the same price. Those apps are all dead in the water as soon as Google ports the Navigation app to other platforms.

The standalone GPS will be fine though. It should survive the cell phone GPS onslaught because it generally caterers to a different market. Do you really think your parents could operate an Android phone, let alone a GPS app within it? Some might be able to, but first they will have to be convinced to buy the phone and expensive data service to go along with it.

There is a gigantic market of folks outside the tech/nerd world that have absolutely no interest in smartphones and the high monthly bills that come along with them. These same people might just pick up a GPS at Walmart though and figure out the rudimentary functions over the course of a few months.

Standalone GPS units also have screen size in their favor. Have you actually ever used a cell phone-size screen for navigation while it’s mounted on your dash or windshield? It sucks. I’ve found the screen size to be way too small. Just think about your Dad’s cataract-filled eyes. How the heck is he suppose to follow a route on a 3.5-inch screen? As the recently announced Nintendo DSi LL clearly shows, an extra inch can make a huge difference.

What will likely happen is that the Google app will finish off the already small market for Internet connected GPS units and top-tier models. These are the units that carry a monthly service fee in return for access to basic functions like gas prices, custom routes, and traffic info. This is where the two markets of smartphone users and GPS owners overlap. But this market was already dying due to the rise of the other GPS apps, and Google Maps Navigation will put it out for good.

GPS manufacturers still need to get with the program and cut down their product line. Garmin is notorious for producing a dozen models, each with a slightly different feature set. How about making just three aimed at three distinct price points: $99, $249, and $500. It simply doesn’t make sense to offer so many different models with minimal price and spec differences.

But here’s the thing. Don’t shed a tear for GPS makers. They will be fine as long as they recognize that the market is changing and adapt. If they don’t, it’s their own damn fault.