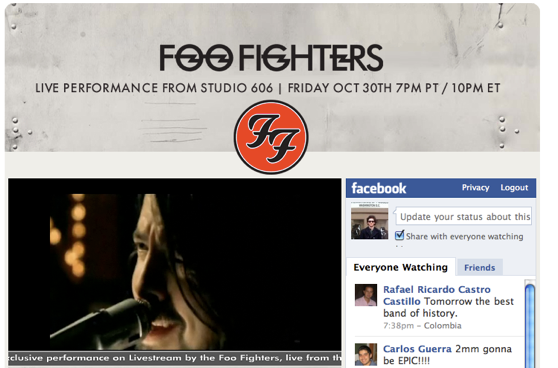 The Foo Fighters will be streaming a concert live tomorrow night on Facebook, direct from the band’s Studio 606 headquarters in Los Angeles. You can RSVP to the event here, and stream it live here beginning at 7 PM PST tomorrow. As with Facebook’s other recent video streaming events, users will be invited to update their status messages with their thoughts about the concert, which will draw in even more fans as they see the updates in their news feeds. The live video will be powered by Livestream.

Live concert streams seem to be a growing trend for the web’s most popular content and social sites. Last week MySpace streamed their Secret Show Weezer concert in San Francisco. And earlier this week YouTube streamed a U2 concert from the Rose Bowl in Pasadena, CA. The event was a huge success, drawing a reported 10 million streams. YouTube also streamed San Francisco’s Outside Lands music festival in August. Hulu has also gotten in on the action, with a Dave Matthews Band stream in May.

The appeal for bands is obvious — they get a chance to give back to fans, promote their albums, and boost their presence on social networks. And sites like Facebook benefit by attracting more artists to their platforms, as well as the obvious revenue opportunities from advertising and sponsorship deals.

Update: It isn’t clear if Facebook is actually sponsoring the stream, or if the Foo Fighters chose the platform on their own. We’ve reached out to Facebook to clarify.
Update 2:: Band Manager Lee Martin writes below:

“We chose Facebook & Livestream on our own. Both parties have been very enthusiastic and helpful. Thanks for the coverage!”