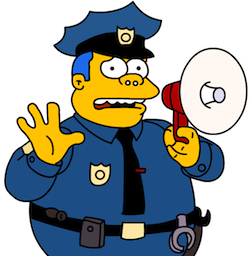 A new law in Ontario, Canada has banned the use of handheld devices while driving. This includes cellphones, GPS devices, MP3 players, etc. Slight problem: the law is broad enough that you can construe it to include doing things like changing the radio station or reaching for a cup of coffee.

Someone caught breaking the law faces up to a C$500 fine. And this isn’t 15 years ago: C$500 is about $460 right now. Pretty serious money to lose because you need to text your friend WTF.

As for that cup of coffee gimmick that Slashdot originally brought up, I sincerely doubt a police officer is going to waste his time and pull you over for sipping a cup of coffee at the traffic light. Unless, of course, Canadian cops are like their American counterparts and have unofficial quotas to meet at the end of the month.

That’s it, really. Don’t text and drive, friends. It’s not safe, no sir.