Gazopa, a search engine that uses features from an image to retrieve similar images, has been in private beta since it launched during TechCrunch50 last year. To recap, Gazopa lets users upload a picture, enter a URL of an image, create a drawing or right-click on an image anywhere on the web (via a plug-in) and retrieves similar images. A thumbnail of a video is enough to look for similar videos.

Results are mainly filtered through analyzing the color and shape of the object or person pictured. Upload a picture of a red car, for example, and Gazopa will find pictures of similar cars on the web – without you having to type any keywords (search via keywords is also possible though).

Since September 2008, more than 40,000 users have tested the service, which entered open beta today. And Hitachi America, the company behind Gazopa, has used customer feedback to improve the quality of search results, tweak the site’s design and add a number of features in the past year.

One of the most notable additions is the Gazopa iPhone app (iTunes link), which is pretty cool and lets you take and upload photos with your iPhone to quickly get similar images off the web. The app has all of the main features of the web version and is free. There’s also a new Gazopa Drawing Facebook application.

Gazopa now allows users to browse through Flickr images and filter out those without a Creative Commons license. When you hover over a particular image, Gazopa will show you its size, how similar it is to the one the search is based upon, licensing details and a URL that will take you the picture’s Flickr page. Another new feature is the news tab under which users can find images related to the latest news. Those images can be filtered by time (uploaded within one month, a year etc.), shape and size.

Granted these aren’t earth-shattering new features, but GazoPa has indexed over 60 million images so far that can be searched even if they have no or inaccurate meta data. The open beta version is still a bit buggy but more than OK for a test run. One major point that leaves room for improvement is that searching for inanimate objects with distinctive features seems to lead to significantly better results than searching for human beings that look similar. It would be nice if Gazopa could at least distinguish between men and women, for example, which isn’t always the case. 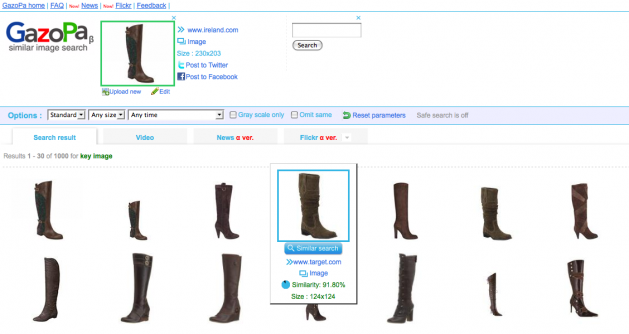