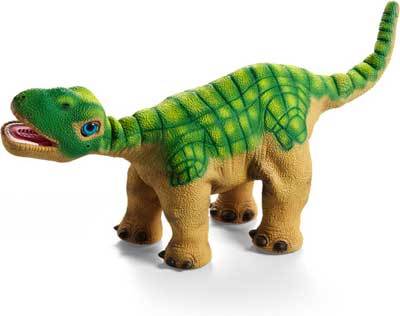 Seriously, who doesn’t want a pet dinosaur? Sure, Jurassic Park makes it seem all dangerous and life-threatening and such. Would you really let that stop you? I think not. But until genetics research and cloning catch up to our imaginations, we’ll have to settle for robotic proxies. And everyone’s favorite little Camarasaurus just got back on the market.

For those unfamiliar with Pleo, it is a animatronic baby dinosaur, designed to evolve based on its environment and interactions. Basically he’ll grow as a real baby dinosaur would.  The Life OS software takes Pleo through three separate stages. Being born, hatching, and juvenile. His full range of movements and behaviors won’t show themselves until Pleo continues to “grow”. Not physically mind you.

The original Pleo had a short life-span of only three years, from 2006 to April 2009 when its creation company Ugobe, filed bankruptcy. But two short months later, Jetta, the original manufacturers of Pleo, announced the relaunch of our green, lizard-related friend here under the Innvo Labs brand.

The Pleo World site is back online, fully functional, and awaiting orders. You can get yours for 349.00 USD.