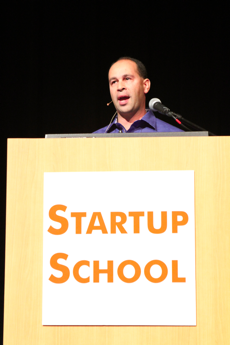 I’m here at UC Berkeley for Y Combinator’s Startup School 2009, where the startup incubator has invited hundreds of entrepreneurs from around the country to listen to some of Silicon Valley’s most accomplished founders and investors share their advice on building a new company. Sequoia Capital Partner Greg McAdoo just took the stage to talk about the current economic conditions, and how startups can actually thrive during them. Below are my paraphrased notes on what he said. You can also watch the live stream here, or using the embed at this bottom of this post.

During the last 12 months since the fall of Lehman, we have been more busy making investments. Made ~20 investments (Series A/Seed) in the last twelve months. Don’t let the negative headlines get to you. If you look back at the headlines of the 70’s (1975-78), there’s quite a bit of bad news, but some of the biggest names (Apple, Atari) were founded then. Likewise, the early 80s had awful headlines, but very strong companies like EA, Oracle, Symantec. Again in the 90’s, and again in this decade (2001-2004). What we’ve learned: there’s a correlation between tough economic times, and the conditions needed to make a great company.

When it’s about saving money, people are willing to get creative (both consumers and enterprise). When it comes to competition, you can a lot of irrational spending during good times, with excessive hires — those go away during down times. Things are much more easily available (office space). Recessions tend to reward companies that are disciplined. You’re also much more inclined to pay attention to those (potentially) few customers you come across. Recessions also reward stealth.

Recession era startups buy the cash register early: figure out early on how to develop a business model, get cash out of customers. Everyone who founds a company in the middle of a recession is generally more committed.

Q: Last summer you were saying RIP good times. Wouldn’t this presentation today have been more helpful last year than this year?
A: I have to tell you, that RIP Good times presentation was very misinterpreted. The point was to say you need run business cognizant of times we’re in. The trick last year, we had lots of startups that started in ‘good times’, and fell into bad habits. Habits that would have killed you now. The message wasn’t fold up your tents. It was reevaluate/reengineer to run like some of these companies. Buying the cash register early, start making money, etc..

Q: You mentioned that enterprises might be more willing in recession to check out a small startup product.
A: You need to have a hard dollar ROI, that is so clear that the person at the enterprise is scared to not listen. Message to send: If you passed up change to save a huge chunk of operating cost, and didn’t do it, you’re going to be in trouble (don’t actually say this, but send that message).

Q: Talk about perception that investors are clueless. Is it hard to find VCs that have tech knowhow to judge startups?
A: I’ve never believed there was a VC community. I spent 13-14 years with startup companies before Sequoia. Every VC firm was different, even within firms. There are people in the community who are, frankly, clueless. You have to do your research on who you raise money from.

A: One thing we commonly see is startup with fabulous technology, but inability to clearly describe, “who cares?”. Need to show there is market, people who will spend money on this product. Describe in business terms why people care.

Q: How does valuation compare to a few years ago?
A: Hasn’t changed much. There’s a business model the founders/ourselves pursue. Valuation doesn’t play much role in that.