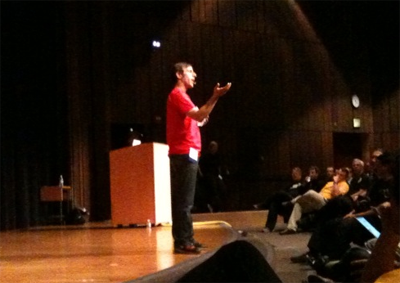 Zynga founder Mark Pincus is the final speaker at Y Combinator Startup School 2009. My notes on his talk are below.

Pincus kicked off his talk by asking the audience how many wanted to become great entrepreneurs (much of the room raised their hand). But fewer raised their hand about becoming a world class CEO, which is something Pincus says they need to address.

Out of college, Pincus says he went into banking and then business school, after which he worked in major corporations. He says that sometimes entrepreneurs are born after finding that nothing lese works for them, explaining “I got kicked out of some of the best companies in America”.

Pincus’s first lesson: You should set a goal for what you want to accomplish. Pincus says he was Fred Wilson’s first consumer deal (“he loaned me $250k and gave me four months to do something”). He started FreeLoader. The company was acquired, but the CEO of the company that bought it “had a nervous breakdown”. At this point Pincus says he had his ‘greencard’ to be an entrepreneur.

Pincus said that after selling FreeLoader, he had some downtime — “And then you get a new group of friends… A ghetto version of the show Entourage” — friends go out on Monday night at 1:30. But that gets old after a couple months.”

Pincus then started another company, called Support.com. “We created this service that nobody wanted, figured out quickly that nobody wanted it.” Pincus says that when you have a friend who has a ‘hairbrained’ idea that they think nobody understands yet — you may want to have an intervention. If you have an idea that can’t get funding, it may be a good idea, but it may be a bad idea. “What I would do is find five friends, give them your pitch, write a powerpoint as if you had $30 million in funding, and come back and tell me here’s what my service will be when this is spent.”

Support.com had core technology that let you clone old PC into new PC called MoveIt. Interviewed people on the street, and they wanted a way to move kids’ games to their new computer. So they actually had something people wanted, even if it wasn’t the core focus of the company.

Pincus says the second lesson he’s learned: not having a clear goal when you set out leads to death by a thousand compromises.

Death by a thousand compromises
Pincus says there’s no such thing as an independly controled company. Your VCs get some board seats, they say let’s both select an independent guy. You find out at the first board meeting the independent guy looks to the investors and says “it’s their money”. Someone else is running your company, and because he’s backing you and he’s a first time netrepreneur, you’re not getting the head of the firm. First day as the VC, and they’re proving themselves on you. And junior VCs are junior for a reason. If you have a conversation with John Doerr, he’ll say yeah, let’s do that. Junior guy is more nervous about the downside. So when you’re successful, they say this company is so valuable, you’ve never run a big company any more, so they talk about hiring a COO. Then you find out there is no world class COO who would work for a 20-something year old (except for Mark Zuckerberg). So then you have to make them CEO. Death by a thousand compromises. Pincus says after an ordeal like this, he was left with a public company that was profitable but he wasn’t fulfilled.

Pincus says he then went to Tony Robins (seriously). Attendees at the conference consisted of 4000 out-of-work realtors. But it works. Robbins says to set very high goals but take any path to get there.

With Zynga, Pincus says he wanted to make a company that put out a consumer service that would be around and would matter for a long time. As Tony Robins says, “Control Your Destiny”. In 2007, he says you don’t have the luxury of just building a feature, you have to build the whole thing.

Referring back to his issues with the board, If you’re profitable, you can control your board. He says we negotiate for the wrong thing because we don’t know what our goals are. “Who gives a shit what your valuation is? At the end of the day your valuation will be more impacted by a board made up by a bunch of old white men who show up once a month for half a day. It’s a lot easier if you just tell them what you’re going to do”.

Second Thing.
“You ought to all aspire to be a great CEO”. When you have a big company, you need to either find someone else to be the CEO, or you’re the CEO. He says the odds are more in your favor if you go to a company where you go to a company like Facebook, Zappos, or Zynga, where we help create CEOs.

On Fake CEOs:
Pincus says a fake CEO is someone who goes out, does talks and photoshoots, while something at the company is “on fire”. Says that he was supposed to be doing a talk at Harvard Business School, but canceled because he had to be there for the launch of Facebook’s changing News Feed.