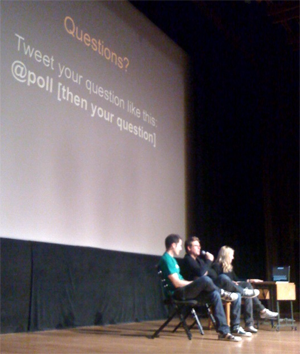 Ev Williams and Biz Stone have just taken the stage at Startup School, where they’ll be taking many questions form the audience. You can submit questions by tweeting a question like this “@poll _________” (where the blank is your question). I’ll be liveblogging the session.

Q: What was the original motivation behind Twitter?
Biz: We should start with Odeo. We were working at Odeo, we weren’t as passionate about the podcasting service as we should have been. We weren’t using it, and that was a problem. Twitter got started because Ev gave us some freedom to think along different lines.

Biz: We (Jack Dorsey and Stone) did a thing where we had two weeks to build something and demo. Build it, try it out over the weekend. If it sticks we may keep working on it. I was ripping out carpeting during a heat wave and then my phone vibrated in my pocket, and it was Ev. And it said he was sipping pinot noir. I realized I was totally engaged in this product. So we decided we should keep working on it. At the beginning it was “okay this seems compelling”. Early on someone said “twitter is fun but it isn’t useful”. Ev said “Neither is ice cream”. So what if it’s just fun? SXSW 2007 was a huge watershed moment for us, first time we saw real potential in the tool. Saw people tweeting about a good session to go to.

Q: How long did the first version take to build?
Biz: It looked a lot like a simple sketch Jack had done. A box for updating, there wasn’t even a question at the time.
Ev: I think it said “what’s your status.” It was very focused on SMS as well. The whole idea was about SMS, that’s why it was 140 characters. But there was one concept that was completely different — because it was status, it didn’t repeat them based on time, it showed them like a buddy list. The first version had the ugliest logo of all time.
Biz: First version was kind of janky but cute, but then we got clever. We learned, “Don’t get clever”. Unless it’s T-shirts, then it’s ok.
Q: When you first launched this, did you realize how big it would be?
Biz: Yeah, we knew Barack Obama was going to use it.
Ev: I knew I was going to be on Oprah in two years.

Q: What about scaling, was that a problem? We tell startups if you have that problem you’re lucky…
Ev: It was a serious problem, but I wouldn’t change that advice. Our problem wasn’t that it blew up and was impossible to scale, but there were some bad choices made. One of our biggest lessons time after time was to focus. Do fewer things. We were doing all kinds of things (Twitter via IM, AIM) when the core thing didn’t work. Got to the point where we started pulling stuff in, which is more painful, because there’s a segment of users that really likes it. We weren’t very organized internally with our engineers. Lots of smart guys pulling off amazing feats, but they were small team and making it up as we went.
Biz: Even with ten people we made an assumption that we all knew what everyone was working on, but that was a wrong move. You still need to make an effort to communicate.

Q: How did you estimate the size of the market?
Ev: We didn’t. There are different ways to approach startups. One thing I admired about Google is we said “this thing is huge, and we’re going to kick ass at it”. It’s the CS approach to business. The other approach is “this might be a thing if we pull this off”. I ran into this when we were at Google with Blogger. People asked how big is the market for blogging? I said “I don’t know”, but if we make it awesome lots of people would do it. With Twitter there is no market, other than we knew it was cool.
Biz: If anything we sort of thought it a waste of time, some of our engineers thought it was a waste of time, “If you add video to it maybe I’d work on it”.

Q: Any advice you got early on that you didn’t take that you wish you had?
*silence*.
Biz: I remember Ev going home one weekend and coming back with this genius plan for Odeo,, asked me to read it. It was this whole plan for how we could make it a successful business. I thought wow this is genius, but then again so is podcasting. Then slept on it. Do we want to be kings of podcasting? We were constantly gut checking.

Q: What advice to you have for anyone developing projects on Twitter?
Biz: Keeping going let us know when you need help
Ev: We want to keep expanding the platform, helping the ecosystem. A lot of the value for twitter comes from third party devs. We’re bolstering our platform team (both engineering and dev support side).

Q: I know when you got started people questioned what you were doing. What did people misunderstand?
Biz: Fun, trivial, someone called it the ‘Seinfeld’ of the internet.
Ev: Both of us went through a similar experience with blogging. There’s a similar pattern with what happened with blogging. Blogging was more a movement than one company. I went for years defending blogging. People were asking why are you filling the web with all of this crap?

: Do you see yourselves going public?
Ev: It’s a possibility. Our goal is to change the world, and we’re going to build the best company we can to realize that goal, reach Twitter’s potential. At some point going public may make the most sense. We’re nowhere near thinking of that. At one time I might have said “that’s ridiculous”, but I don’t say that any more. We can be more creative than IPO or being acquired.

Q: How important was API to your success?
Biz: Huge. Really early on this contractor was working from Germany, didn’t want to pay SMS from Germany. Said I want to write something that lets me do it from IM. So we were like, why not make an API (in Rails is one line of code). Some stuff happened. Twitterific guys made cool Mac app. Desktop app for Twitter was cool. Previously if you posted from web it said “via” web or “via sms”. We did “posted via twitterific”. That was the beginning. Now tens of thousands of different apps.

Q: Geolocation.
Ev: We are building geolocation into Twitter. We’ve had fledgling support on profile. And you can search by location we determine in fuzzy way. Location is huge. Reason we’re excited about geolocation, we don’t know how it will change our business. We’re releasing location in the API, eventually in our interface.