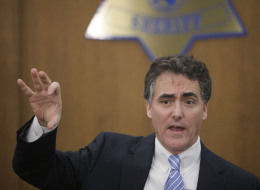 In an interview with the Wall Street Journal, Dart (pictured) said he was disappointed with the verdict and is now considering an appeal.

Federal District Court Judge John F. Grady threw out the lawsuit, which was filed in July 2009 and got Dart a lot of attention, in its entirety.

The judge said that it was far from clear that Craigslist had actually encouraged its service to be used for advertising prostitutes, which was the core of Dart’s allegations. Grady added that Craiglist may even be able to claim protection under U.S. freedom of speech laws and the Communications Decency Act, which immunizes Internet intermediaries from civil liability for material posted by others.

Dart has now reportedly “vowed not to give up” and seems determined to waste more valuable time and resources on this ridiculous case.

We couldn’t have put it better than the Electronic Frontier Foundation’s Matt Zimmerman, who wrote:

Meritless cases brought by law enforcement officers, amounting to little more than publicity stunts with little to no chance of success, do little to address the officers’ underlying concerns.

You might remember how South Carolina Attorney General Henry McMaster threatened similar legal action against Craigslist but ultimately got served nothing but humiliation when another federal judge blocked him from prosecuting Craigslist management, at least until he’s made a final decision on the case.