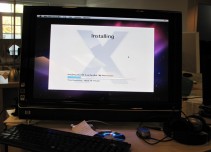 Reader Louis sent in this longish missive about his own experiences installing a Psystar Hackintosh. We were stymied last night by the authentification procedure so we didn’t even get as far as Louis but it seems that the install, while fairly seamless, is fraught with problems. The speakers on our HP, for example, don’t work and while Apple’s Ink feature shows up in the control panel, the touchscreen is about useless.

I saw your article about the success you’ve had. I’d like to share my experience to date.

I’m running a G31M-ES2L and an 8800GT. It’s an original PsyStar machine with an upgraded video card.

I purchased the app yesterday. Followed install instructions posted .
The SL install reports a failure but I could boot to the desktop in SL with the Rebel EFI CD. (The instructions have since been revised to reflect this).

Note: I also had to use a PS2 kbd in order to select the HD option when booting from the PsyStar CD (USB doesn’t work for me until I get to the desktop).
Went through the normal OS registration info that comes up after install.

The machine is basically crippled without an activation code for the Rebel EFI application ( it installs the kexts etc needed to properly recognize your HW) and Psystar is behind on sending them out (Just spoke with a very nice support person).

So, all in all, things proceeded as they should have up to that point.

However, the app errored out with my account info in the next step.

Apparently you can’t get phone support for this app. I spoke with a tech who noted I had to send an email for support. He was very nice but couldn’t help.

I rebooted and tried the authentication code a second time and the app won’t even accept it. It simply errors out now.

REBEL EFI doesn’t appear to be ready for prime time yet, IMO.

Who wants to wait days for support for something that’s supposed to simplify a process?

FTR I do own Apple HW and this is mostly a fun/tinkering machine for secondary use.