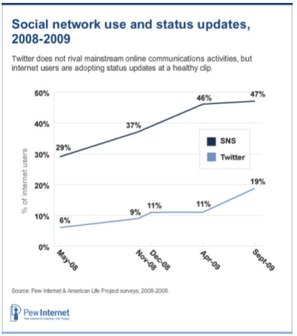 A new Pew Internet And American Life Project study is being released today which reports that internet users on a whole are becoming more likely to update their statuses online (on social media networks). The report says that 19% of internet users say they use Twitter or another service to share updates
about themselves, or to see updates about others. When Pew surveyed the group in April of this year and in December 2008, 11% of internet users said they use a status-update service.

Updating status online is a learned behavior for most internet users. It’s not something users tend to do naturally but these statistics shows that people are increasingly looking to Twitter, Facebook and other sites to update their status, which is definitely noteworthy. The full report is embedded below.

While the survey seems to revolve around Twitter, it’s unclear if respondents were referring to Twitter or Facebook because of the way the question was framed. The exact survey question was “Do you ever use Twitter or another service to share updates about yourself or to see updates about others?” Facebook has an incredibly large user base that posts status updates and a larger userbase than Twitter. In fact, Facebook was one of the first networks to coin the “status update.” I’m really curious what percentage of the “another service” category Facebook makes up. A representative for Pew said the question was open ended because they wanted capture the the general gist of “status updates” vs. seeing what the breakdown was of the origin of the updates. Twitter was chosen as the lead in the question because the currently, the “moment is ripe for Twitter as the exemplar of status updates.” This discounts of course that Facebook has more users and traffic than Twitter, but ok. UPDATE: Facebook’s COO Sheryl Sandberg reported today that Facebook gets 45 million status updates per day.

The study also reveals some not-so-surprising stats. For example, the report claims that wireless access is an key factor in predicting whether someone uses Twitter or another status update service, with users who own and use a wireless internet device makes an internet more likely to Tweet or update their status. Or, that users with more internet-connected devices (computers, phones) are more likely to update their status or Tweet. Well, duh.

The report also indicated that Facebook users may be graying a bit. The median age of a Twitter user is 31, whereas the media age for Facebook, now 33, up from 26 in May 2008.

What the study did not highlight is that increase in status updates (across all social networks, not just Twitter) is also attributed to the fact that these networks are steadily making it easier for users to post updates to multiple networks at once. MySpace recently launched a publish to Twitter feature, and Facebook launched a limited version and may be launching the full monty soon. And of course, web and mobile-based Twitter and Facebook clients like Tweetdeck, Tweetie and Seesmic also make it simpler for users to post status updates.