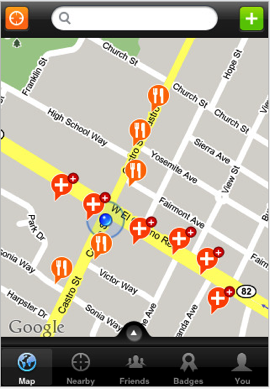 Last night we broke the news that location-based mobile social network Loopt had acquired GraffitiGeo, a fellow Y Combinator-backed startup that launched only a few months ago. Neither company was willing to comment on the acqusition last night, but earlier today they finally confirmed it and opened up to share some of the logic behind the deal.

GraffitiGeo launched in August, when I described it as a ‘Foursquare meets Yelp, with a dash of augmented reality’. The service invites users to review local restaurants and other venues in a manner that’s similar to Yelp, but encourages them to leave very brief descriptions (or just thumbs up/thumbs down) instead of the longer reviews you’ll find on other sites. Alongside these reviews there’s also a gaming element similar to foursquare that rewards players with points whenever they leave a comment. There’s also a system that lets you earn more points if you team up with your friends.

Loopt CEO Sam Altman says that he came across GraffitiGeo while the product will still early on in the Y Combinator program (Loopt is a YC alum), and that he took notice of the app’s feature set which paralleled some of the areas Loopt is interested in as well. In particular, he says Loopt has been exploring location-based social gaming, local reviews, and augmented reality (which is another area GraffitiGeo has experimented in), so the company seemed like a good fit. He says he was also impressed with the team, which he describes as “super smart” — founders Nikhil Pandit, Teng Siong Ong, and Jared Tame are all joining Loopt as part of the deal. Altman wouldn’t comment on it, but there’s one final GraffitiGeo feature that Loopt is likely very interested in: a platform for local business advertising.

Altman wouldn’t get into specifics as far as how GraffitiGeo’s features will be integrated with Loopt, but he says we’ll be seeing some changes very soon. He says he’s excited to see what happens with GraffitiGeo, which has around 20,000 total users, when parts of it are built into Loopt, which adds 20,000 in a single day.

Coincidentally, GraffitiGeo released a much improved new iPhone application today on the App Store. You can grab it here. At this point it isn’t clear if Loopt will keep GraffitiGeo as a separate application indefinitely, or if it will be rolled into Loopt, but there are no immediate plans to combine the services.