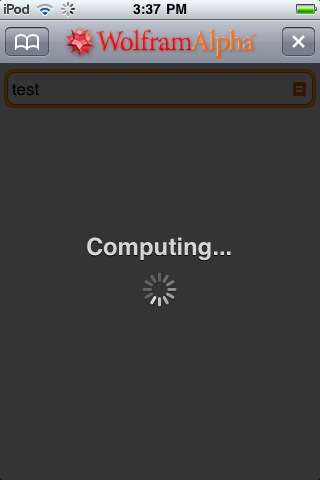 Apple wasted little time approving Wolfram Alpha’s new iPhone app, which we hinted at last week. Just a few days after they submitted it to the store, Apple sailed it right through the approval process with such speed that it even surprised the Wolfram Alpha team, which had hoped to get some feedback from testers before the approval. I was one of those people, so rather than send them feedback, I’ll write it here.

There are two key points about Wolfram Alpha’s iPhone app: 1) It is pretty cool, and very nicely done. 2) They’re insane for trying to sell it for $50.

I’m going to mainly focus on second point here, because if you’ve used Wolfram Alpha, you don’t really need much explanation about this app, which is a slick interface for the service. And while I get Wolfram Alpha’s logic behind selling the app for $50, I think it’s faulty logic. Here’s what they’re telling us:

A note on price — it is listed at $49.99, which is basically less than 1/2 the price of a graphing calculator with inferior functionality in comparison, which is how the company came to that number. Or, as we’ve been saying, the price of 12 lattes from Starbucks…

Both of those points are true, but the App Store has created a different economic reality than say, walking into an Office Max and buying a graphing calculator. It’s no secret that most apps that sell well tend to be cheaper — as in, free or $0.99. Apple has recently tried to de-emphasize this by adding a “Top Grossing” section to the App Store. That’s fine, but with the exception of the $90 Navigon GPS turn-by-turn app, all of the top grossing apps are under $10. And most are under $3.

And I’m sorry, but Wolfram Alpha does not yet have the clout of Navigon, nor is it in the hot turn-by-turn GPS space that would warrant such a high price. “We do plan to offer regular discounts and sales,” the team tells us. But if they really want this app to sell, they’re going to have to knock off like 90% of its price. Actually, to be honest, even at $10, I’m not sure how many people would buy this app. 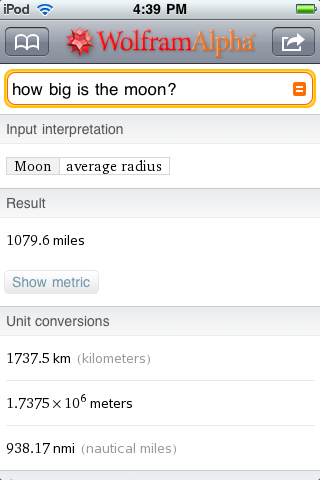 And that’s too bad for the team. As I said, the app is a solid one, but this is the reality of the App Store. Games that sell on systems like the Nintendo DS for $30, are $3 on the iPhone. Hell, there are even some games that sell on the bigger consoles for $60 that are less than $10 on the iPhone. They’re not quite as good graphics-wise, but I would argue that they’re every bit as fun. And don’t think for a second that studios like EA wouldn’t sell them for $30 if they could, but they realize that they can’t.

Wolfram Alpha may have to figure that reality out the hard way. It’s fine that it can replace your $100 graphing calculator, but it’s also limited because it requires WiFi or a 3G connection to do so. And the iPhone already comes with a calculator, which can turn into a more advanced one, and both of those are free. And there are dozens of graphing calculator apps in the App Store that sell for a whopping $0.99.

Okay, you might say, but Wolfram Alpha does offer a lot of interesting data far beyond graphing calculators. That’s also true, like giving you a detailed read out of how many calories are in a Big Mac, fries, and a Coke. But if you’re using this on your iPhone or iPod touch, you already have access to Google, and more to the point, the mobile web version of Wolfram Alpha, which is free.

Clearly, the service had some insight into how controversial the price will be. They go on to note:

The core WolframAlpha site will always be free. This is one of several “premium” experiences that the company will offer in addition. The app is targeted at the most serious users, and is priced as such. Likewise, we feel that the app’s egonomics and speed make it well worth the investment.

I can only assume they mean “ergonomics” there, but we’ll forgive them for that Freudian slip. 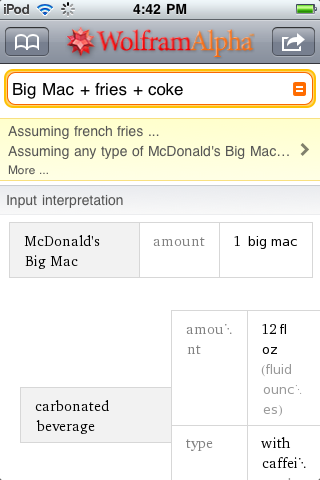 The app absolutely does offer a nice experience, one that yes, is better than the free website. But $50 better? No. $10 better? Maybe. $5 better? We’re getting closer. Again, right or wrong, this is just the reality of the App Store economy.

As we’ve noted previously, the iPhone app is the first example of Wolfram Alpha’s new APIs that they hope will extend their most valuable asset: Their data. But if you’re trying to get more people to use access your data, charging $50 is not a great play. A better one may be to get people hooked on your data, then charge down the road when they realize how valuable it is — if they ever do, which is still far from certain with Wolfram Alpha.

It’s also interesting to note that despite talk of a deal with Bing, the defautl web search in the Wolfram Alpha app is Google. Both Bing and Yahoo are options, but you have to change it in the settings.

You can find the Wolfram Alpha app here in the App Store.