Digg founder Kevin Rose launched a side project called WeFollow, a Twitter directory, earlier this year. Twitter users can go to the site and add themselves under a specific category. Without much in the way of marketing, the site has grown to 654,000 Twitter users, all of which went to the site and added themselves. And now, someone with knowledge of the deal tells us, Rose has transferred WeFollow ownership to Digg.

This wasn’t exactly an acquisition, though, because Digg didn’t pay anything for the site. “The data became very useful for Digg,” says our source, and it was awkward keeping it outside of the company.

Digg has long been planning to launch a more real time version of the site, and we’ve speculated that Digg will soon surface new top stories based at least partially on stuff becoming popular on Twitter and other similar services. WeFollow gives Digg data on who the top Twitter users are for various categories.

WeFollow is also changing the way it ranks users. Currently it’s based only on total follower counts on Twitter. In the next day or so, though, WeFollow will change its algorithm and give more weight to users who tag themselves properly, and then have followers who have also tagged themselves similarly. For examply, if TechCrunch is tagged “startups” and a lot of people following TechCrunch have also tagged themselves startups, that gives a lot more weight to our account in that category. This goal is to reduce spam and give better data.

Below are screenshots of the new, yet to be launched service. The top shows the SEO tag by number of followers, the current way WeFollow ranks users. The bottom shows ranking by influence. Matt Cutts jumps to the top of the list, even though he’s only no. 8 in overall followers. 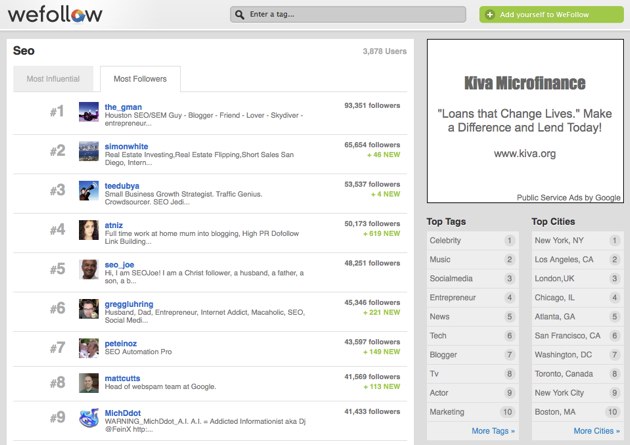 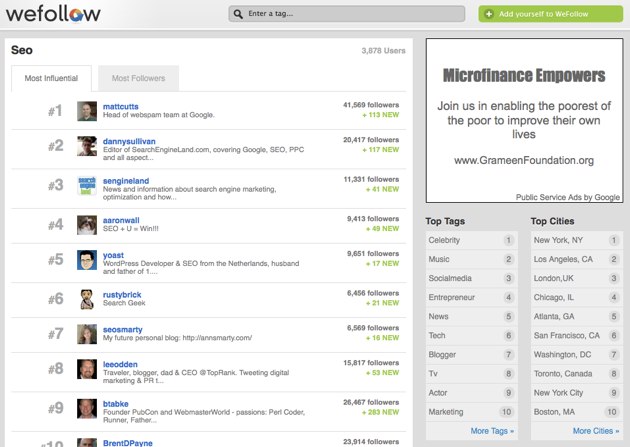