In the U.S., many of us use Twitter through its website or through a third-party client that uses its APIs. But an original key to Twitter, and one that remains very important to reaching the widest possible audience, is text messaging. For a while, it looked like that functionality was going to die, suffocated under the ridiculous carrier SMS fees, but Twitter has been working to bring it back. And today, they’re announcing a new deal to further expand the service: A partnership with Bharti Airtel, the largest carrier in India.

The deal allows for Bharti Airtel subscribers to receive tweets via SMS for free and send them for the standard text messaging rate. This may seem like not a big deal, but the reason Twitter had to keep shutting down SMS service in many countries last year was that the carriers were insisting Twitter pay them high fees to make up for all the tweets being received over SMS for free by users. Twitter has clearly started striking deals that both the service and the carriers can agree on now.

And SMS in India is very important, not only because of the country’s 1 billion residents (over 100 million of which are on Bharti Airtel), but also because many in India don’t have access to high speed Internet (nor do most of them have iPhones with cheap all-you-can-eat data plans). This is the reason that Facebook decided to first test its Facebook Lite project in India. But SMS is a bridge that many more people can go across in places like India to access Twitter easily.

To start using Twitter on Bharti Airtel phones, simply text START to 53000. Just remember, sending these texts will cost you, even if they cost the carriers basically nothing.

Twitter doesn’t shy away from lofty (to say the least) goals here:

Four billion people on Twitter? Maybe Miley Cryus will even come back.

Update: And Twitter is already emphasizing the new SMS service to its Indian users as you can see in the screenshot below. 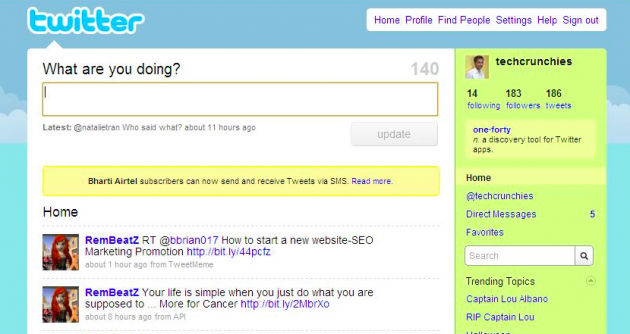