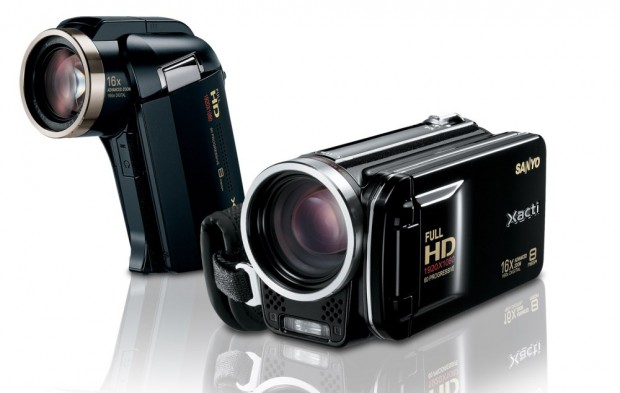 Yesterday I lamented Apple’s decision to establish its own video standard, which, while little more than a suggested resolution and bitrate, does not fit will with any devices anywhere. The steady progression of VGA or WVGA, 720p, and 1080p are perfectly fine for the moment. That’s why every camera in the world shoots to one of them. 1080p is too much for most people to work with, but 720p isn’t that bad (though render times can be long), and VGA is really not that bad at all (Doug swears by it). So why the hell put a new one in there between WVGA and 720p? I don’t like the idea of Apple bullying companies like Sanyo, who make perfectly good camcorders already, to add an option which needlessly complicates things.

But let’s just get these camcorders out of the way, because they’re worth taking a look at. The two cameras are almost the same spec-wise except the horizontally-oriented FH1 has a 3-inch LCD as opposed to the pistol grip HD2000’s 2.7-inch. They appear to be quite versatile camcorders, able to take 12 stills a second or shoot up to 600FPS video at reduced resolution, something which was until recently the exclusive ability of Casio Exilims. They’ll shoot 1080p video at 60FPS, which is pretty amazing, though I don’t recommend you do it. Interestingly, they won’t shoot 720p or 640×480 at 60FPS — a bit odd. SD cards are the medium you record to, and both cameras have a 10x optical zoom. Quite a neat little package for $500! Or $600 if you want the pistol grip.

But to return to the rant. These cameras will also shoot, and in fact will default to, the 960×540 iFrame format. Come on. It can do so much and you’re defaulting it to this random format?