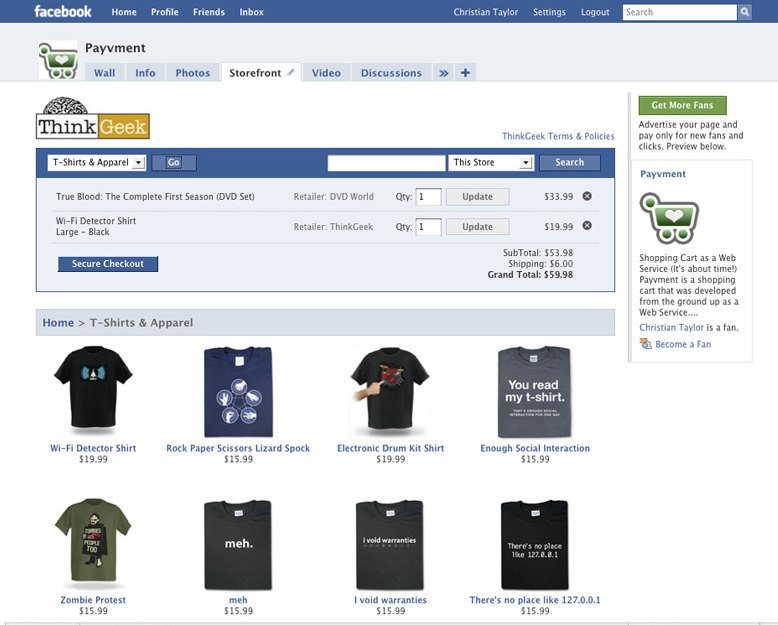 In an effort to compete with Amazon’s Flexible Payments API, PayPal recently announced its version of the API, called Adaptive Payments (which we scooped over the summer). PayPal’s API gives developers full access to PayPal’s features, allowing them a lot more freedom in building applications, which includes the ability to accept and distribute payments. Over the course of the past few month, PayPal has been working with several startups as part of a pilot program to show the capabilities of the API in anticipation of a broader rollout in November. Payvment, which powers online shopping cart technologies and uses PayPal as a payment mechanism, is launching a potentially revolutionary new Facebook app that would let anyone set up a retail storefront on Facebook.

Payvment was originally developed as a web service that would allow any site owner to integrate a shopping cart into their e-commerce offering. You can add the technology to your site by simply adding one line of code to the site. Payvment’s Facebook App is more comprehensive and lets anyone create a retail store on Facebook. The app lets you set up products, categories of products (i.e. shoes, T-shirts, sweaters), import photos, list terms of service and shipping options and more. Once you set up your online shop on Facebook, it will show up in a separate tab on your profile or page under “storefront”.

Once the shop is set up, potential buyers can interact with the storefront like they would a -commerce site. You can add desired products to your cart and remove them easily. Payvment also lets buyers conduct searches within the store. When a user adds a product to their shopping cart on Facebook and clicks to follow-through on buying the product, Payvment takes the user to a separate page outside of Facebook, where the user can use PayPal to buy the object. Payvment’s CEO and founder, Christian Taylor, tells me that it is necessary to conduct the transaction on a separate site because Facebook doesn’t yet offer e-commerce security options. And any purchases made will not be made pubic to your friends.

Of course, there are ways to sell virtual goods on Facebook, including Facebook’s own payment system, and a few storefronts have already been popping up on Facebook, including apps for 1-800-Flowers and Sears. With these retailers, transactions are completed outside of Facebook, on the retailers page. Payvment adds to this functionality to by letting anyone set up a retail storefront for free. Taylor adds that this app will eventually be made available on other social networks. One of the draws of Payvment is that its code and Facebook app are free for the moment. So retailers don’t have to put any money up to set up their shopping cart and storefront.

Payvment, which will be launched to the public on Nov. 3 and PayPal’s Innovate Conference, seems like a innovative way to integrate social e-commerce on Facebook. It seems like a no-brainer for smaller retailers which don’t have well-established sites to create a revenue stream through Facebook. In fact, even larger retailers who have established e-commerce sites can feature and sell a select group of products within Facebook. And retailers, both big and small, are flocking to Facebook for marketing purposes, why not add the ability to buy as well? Personally, I’d love to see a virtual mall on Facebook with multitudes of retailers.

PayPal is smart to engage developers in the early stages of releasing this new API. The company also partnered with TechCrunch50 demopit startups FundRazr and Lottay to build off the adaptive payments API. In fact, PayPal’sPayPal X Innovate 2009 conference in November is designed to attract more developers to the platform. The new APIs will only be released to those developers that attend the conference. Although, we scooped the news of the new Adapative Payments API, PayPal says that additional APIs will be announced at the conference. It should be interesting to see what these APIs enable developers to build, considering the impressive vision PayPal has for the future. 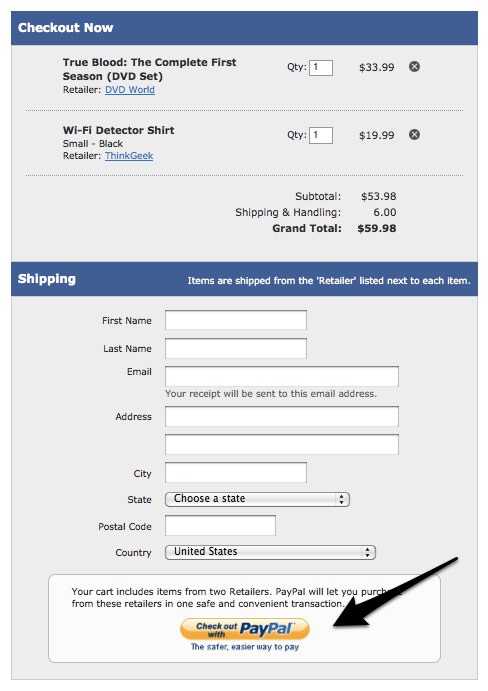