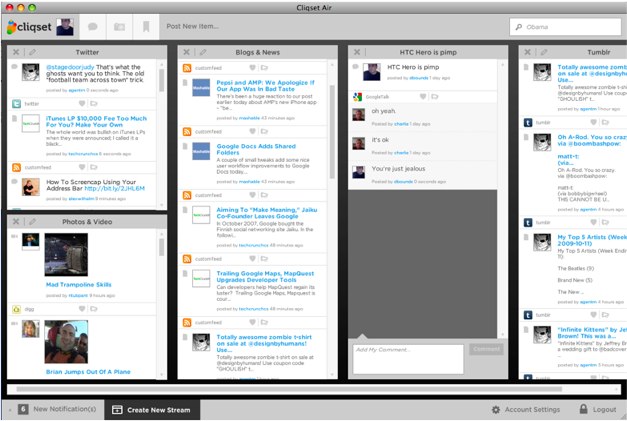 We recently wrote about the real-time update and redesign of Cliqset, a Friend-Feed-like online identity platform that lets users merge and share a vast variety of social information, including status updates, location, photos, and more, onto one platform. Cliqset aims to be a one-stop-shop for social communications, pulling in content from close to 70 social networks and services, including MySpace, Twitter, Facebook, LinkedIn, FriendFeed and more. Users can also update their status, and share photos, bookmarks, reviews on Cliqset and push them out to wherever they choose. Today, Cliqset, which is exiting private beta, is launching two external applications of its platform—a Boxee app and an Adobe Air-powered desktop app.

Cliqset’s Boxee app lets you comment on any videos you are watching within Boxee. The app lets users chat with their friends or any other user in real-time while watching TV episodes, movies or other video content on Boxee. While the stream that will appear while watching a video only includes Cliqset users who are watching and commenting on the same content, you can also access your comprehensive Cliqset stream from within Boxee as well. Boxee has partnered with other social media platforms such as Digg and Tumblr, to incorporate each site’s functionality within the streaming software.

The Adobe Air-powered app lets you have much of the same functionality as the website, but users can organize and filter streams in stacks, similar to Seesmic or Tweetdeck. Users can share content, such as text, links, photos and bookmarks, and can also create various activity streams broken down by type of service. So you could break out your Twitter and Facebook streams into separate stacks. This is actually helpful, because aggregating real-time content from a variety of services can get confusing. The app also has a notification system that alerts you to comments made in a stream you are attached to.

My only complaint about Cliqset’s desktop app is that it is powered by Adobe Air, which tends to be buggy and slow my computer down. But for those of you who dislike Adobe Air as much as I do, there’s always the web-based platform. In September, Darren Bounds, president of Cliqset, told us that the platform aims to be a less clunky version of FriendFeed, with a target audience of users who aren’t as technologically savvy. And Cliqset plans on launching and iPhone app and an Andoird app in the near future.

Similar to the web app, Cliqset’s Boxee app and desktop app are both The platform fairly intuitive, which could boost its popularity amongst users. But as we’ve said in the past, the real-time social media stream is fast becoming a crowded space with Threadsy, Streamy and others launching compelling platforms. And who knows what Facebook will do with FriendFeed.

Cliqset closed a second seed round, $1.5 million coming from angel investor Derek Mercer, founder and former chairman and CEO of Vurv Technology, a provider of talent management software that was acquired in 2008 by Taleo for about $128.8 million. This comes in addition to an earlier early-stage capital injection of $500,000 by the man, bringing the total invested in the startup to $2 million. 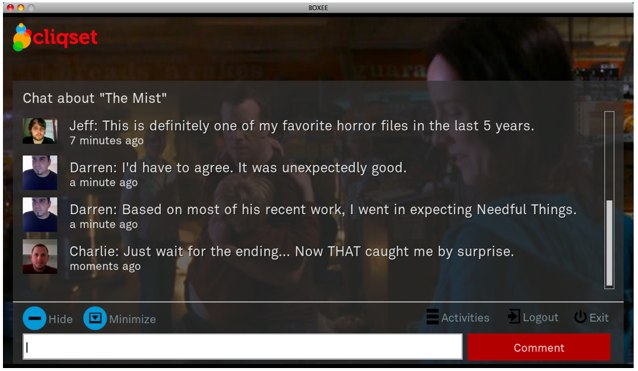