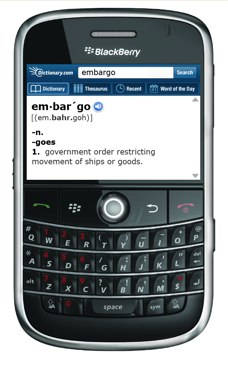 Earlier this year, we wrote about Dictionary.com’s nifty iPhone app. Since April, the app has seen 3 million downloads and is steadily growing in popularity. Today, Dictionary.com (which as part of the Ask.com network that also includes Thesaurus.com) is launching a similar application for BlackBerry smartphones, which has a few key differentiating factors from its sister iPhone app.

In addition to providing users with more than 500,000 words, definitions and synonyms, the app also features audio pronunciations, spelling suggestions, a “Word of the Day” for both English and Spanish and the ability to view a recently searched terms list. One of the features that is exclusively available on the Blackberry app is the ability to access a definition or synonym while reading or drafting an email. The app lets you highlight the word and you’ll be given an option to find a synonym or definition. The app also has a native feature that lets you email or SMS text any word and its definition to yourself or a contact.

Doug Leeds, president of Dictionary.com, says that the features included in the Dictionary.com app were designed to meet the specific professional needs of BlackBerry users. For example, definitions have been condensed to be more functional on a Blackberry screen. Leeds also tells us that they are releasing their API to partners to incorporate into various applications. While Dictionary.com is still finalizing partners, Leeds says that the API will be incorporated on e-books, letting users (but wouldn’t say which one).

While Dictionary.com’s BlackBerry app is free, the Oxford American Dictionary is $19.99 on Blackberry’s App world. Dictionary.com was bought by IAC-run Ask.com in July of 2008 when the conglomerate bought Lexico, the operator of Dictionary.com, Thesaurus.com and Reference.com.