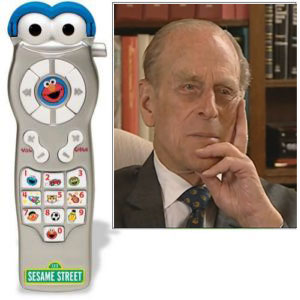 A couple days ago we wrote a nice, healthy rant about the awful state of television controls. Now Prince Philip, the Duke of Edinburgh (also known as Queen Elizabeth’s husband), has joined the cause. Speaking to Britain’s Channel 4, the duke went on a rant of his own again the complexity of modern television operation. I’m not saying for sure that he reads TechCrunch, but I’m saying he definitely should be, it’s apparently right up his alley.

The reason for the interview was that it’s the 50th anniversary of the Prince Philip Designers Prize, an award given by Britain’s Design Council to celebrate elegant design. When asked if the state of design was deteriorating in some ways, the duke agrees and immediately starts his rant against television design (about 6:50 in to the video below).

Some of the best bits of the interview aren’t in the video, but are highlighted in the BBC article about it. At one point, the duke says, “To work out how to operate a TV set you practically have to make love to the thing.” And speaking specifically about remote controls, he says, “And why can’t you have a handset that people who are not 10 years old can actually read?” My thoughts exactly in noting that remote controls these days are Fisher Price-like.

Overall, it’s an interesting discussion about the move away from exceptional design and towards more functional and in some cases, convoluted design, especially in technology. What I want to know is, if the the 88-year-old Duke of Edinburgh understands that modern television controls are awful, why don’t the cable companies who are now largely in control of the interaction between you and the television?

The answer is that they do, but they just don’t care. And by most accounts the situation is much worse in the U.S. than in Britain because here the FCC has seemingly decided that they’re fine with a lack of competition in the marketplace.