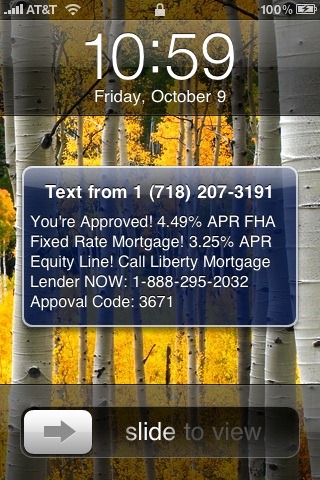 Well it looks like my not-even-a-month-old new cell phone number is already out in the wild somehow. I received this unsolicited text message from a 718-area phone number, which Nicholas tells me is Brooklyn or Queens, New York (I’m in Boston).

Couple problems here. First, I don’t own a home and I’m not looking to buy one anytime soon. Second, I’d probably look for a reputable lender. Nicholas also said, “You can basically assume that if someone has a 718 area code they at least have a small knife on them at all times.” I’m just not comfortable meeting with knife-wielding mortgage lenders at this stage in my life.

Third, I’m not going to blame AT&T for this particular message. I can’t say for sure that they sold my phone number – I doubt they did. If anything, my new number is someone else’s old number – a number that could have been entered into one of thousands of web forms, reputable or otherwise. Whatever the case, it’s out there now.

I will, however, blame US wireless carriers in general for charging people to receive text messages, wanted or unwanted. If I didn’t have an AT&T texting plan – I do, I pay $5 per month for 200 messages – then I would have had to shell out 20 cents to receive this unsolicited text. So it’s either add a texting plan or pay for every text message that gets sent to me. What a racket.

Now to be fair, I could turn off text messaging completely by calling up AT&T customer service and telling them to nix all text messages to and from my account. But what if I was a guy who wanted the ability to send a few text messages each month? I’m exactly that guy.

If someone calls me and I don’t answer, I don’t use any of my plan minutes. That makes total sense. If someone sends me a text message I don’t want, my options are to either pay 20 cents or to add what I believe to be a wildly-overpriced texting package.