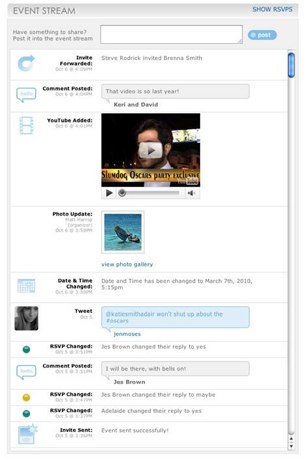 The site lets hosts select a custom hashtag when creating event, which is included in the online invitation. The site will then aggregate all Tweet’s onto the event site with the given hashtag. And of course, if you choose a more general hashtag like #Oscars for your Academy Award-focused party, you’ll aggregate a general stream of Tweets about the Oscars. The stream will also feature news and updates about the event, including changes of details, other guest RSVPs, photos posted and comments.

Pingg, which launched in early 2008, was one of the initial startups to try to beatify and improve upon a concept that Evite ran with back in the day. Backed by Martha Stewart Living Omnimedia, Pingg offers users stylish invitations with design tools and a vast library of images to create the perfect online invite and site. Pingg’s customizable, ad-free event web pages also include photos, video, gift & charity registries, tools for collecting money, RSVP tracking, guest messaging and more. Event hosts can set up automatic reminder messages and thank-you notes when they are creating their invites.

Incorporating a stream into an event’s site is smart and Pingg is definitely moving in the right direction with this. Pingg already lets you post your Pingg invite directly to Facebook and message specific friends from the social network for an event. One feature missing from Pingg’s stream is the ability for a host to Tweet directly from the event’s site, which would be useful. Pingg is similar to Cocodot, an invite and event planning site that launched at TechCrunch50 this year.