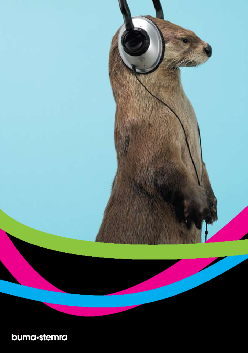 Buma/Stemra, a Dutch collective rights society that represents the interests of copyright holders (some 19,000 composers, authors and publishers), is the topic of the day in the Dutch blogosphere and beyond. The association has managed to wield itself into the eye of the storm because of the introduction of new, exorbitantly high digital music licensing fees, and its stated willingness to fine bloggers up to €21,6 (roughly $31.8) per music video they dare embed on their websites or blogs.

Buma/Stemra has commissioned a local startup called Teezir to build an Audio Detection Solution which the company claims is capable of automatically detecting copyrighted audio on Dutch websites. Should the association use the crawler to find out you embedded a YouTube video featuring material from a composer or performer who is registered with Buma/Stemra, then they aim to charge you their new annual license fees for embedded content (calculate them here).

Update (9 October 2009): this article in Dutch reveals Buma/Stemra has put its foot in its mouth and decided to withdraw from trying to impose fines on individuals who embed music videos, stating they’ll only target ‘commercial’ users after all. Caveat: The association says every website that has ads on it is a commercial venture, which means if your Blogger blog has Google ads on it, you could still be on their radar.

These fees, which will become effective 1 January 2010, were laid out in this brochure (PDF in Dutch) and are, according to the director of Buma/Stemra, calculated based on the fees they currently charge for offline music playback such as copyrighted background music in bakeries and the likes. The fees amount up to €130 ($191) for up to six embedded files, €260 ($383) for up to twelve, and if you embed over thirty files you will be liable for €650 ($957) per thirty or part thereof (i.e. 31 embedded files on your site will set you back €1300 or roughly $1914).

Because God forbid you might want to provide their right holders with a bigger audience for their music and potential new fans who would buy their albums and pay to attend their live performances. The horror!

The association did say that they do not intend to ‘chase’ individual bloggers, but also added that they will not be excluding them from eventual fines either. In an extraordinary act of compassion, they intend to give naughty embedders the chance to take the material down before going after their wallets. Buma/Stemra is currently also trying to start conversations with Google (YouTube, Blogger) and local blogging platform providers like Hyves to try and get financial compensation for them for the distribution of copyrighted material by their users, but so far hasn’t reached any agreements with either party.

Fortunately, several political parties in The Netherlands have already stated that they are concerned about Buma/Stemra’s intentions, posing questions about the juridical grounds for the new licensing fees and publicly wondering if it’s actually a smart idea to refrain music fans from spreading the work of their favorite artists.

So we can all keep enjoying this video clip of Dutch rock band Golden Earring, with ‘When the lady smiles’.