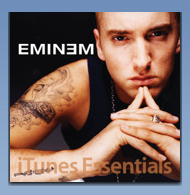 When is an update not an update? Today we learned that Eminem has reached a settlement with Apple over what he claims was the unauthorized use of his songs. Eminem said the record label has the right to the recordings, but not the right to turn around and sell said recordings to Apple.

What we don’t know, however, is any of the terms of the deal. How much did Apple have to cough up? Did Eminem and the record label have to pay for each other’s attorney fees? Nobody’s saying anything!

So, again, when is an update not an update?

I don’t know about you, but I can now rest easy knowing that, presumably, Eminem is a little bit richer today.