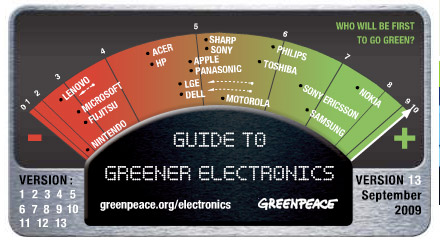 Like many of you, my knowledge of Greenpeace begins and ends with that one Seinfeld episode, the one where the NBC executive, so in love with Elaine, freaks out and joins the organization in order to impress her. That is to say I don’t really understand the “point” of the organization, or who appointed it the protector of the environment. But, it is, somehow, so let’s roll with it. Good news for HP and Apple: Greenpeace hates you two a little bit less today! Break out the champagne!

Now, what have Apple and HP done to get on Greenpeace’s good side? We brought up Apple’s efforts to placate the environmental organization the other day, but to recap: Apple cut a whole bunch of garbage from its products, and does a lot to make sure its factories are as green as possible. So that’s what Apple did.

Meanwhile, over in HP Land, those guys have “[put] a PC on the market that is virtually free of PVC (vinyl plastic) and brominated flame retardants (BFRs).”

And who is Greenpeace’s favorite company? That would be Nokia. There’s a whole list of who are, in Greenpeace’s estimation, the greenest companies out there. The worst company? Nintendo! All those nuclear powered Wiis out there!

But like I said the other day, I really don’t know too many people who buy things based on their environmental impact. Can I afford it, and does it work well? That’s what I figure most people are thinking when they walk into the mall.