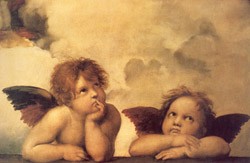 This past week saw the resurrection of Net Neutrality as a divisive issue. Some folks (people like Google, and, well, us) are in favor of Net Neutrality, while other folks (primarily the ISPs) are against it. Not long after the FCC announced its intentions, six Republican senators, three of which who received quite a lot of money from AT&T, proposed an amendment to a bill to stop the FCC in its tracks. The senators later rescinded their amendment, saying that they were now open to a “dialogue” with the FCC.

Which brings up to today’s point: are there any angels in this debate? The Wall Street Journal recently, I guess, came to the defense of the ISPs: why should Google and whoever else be allowed to profit off the Internet Service Providers’ networks? Why should, say, Time Warner, subsidize Google’s online applications with its broadband network when it (Time Warner) doesn’t stand to make any money?

That’s how the Wall Street Journal characterizes it, at least.

The WSJ says that people like Google (I keep bringing up Google because it stands to benefit the most from an open Internet) want to maintain the status quo: it doesn’t want to have to pay Time Warner (or whoever) hand over fist just to keep it from shutting off access to Google Maps.

The WSJ also brings up how one of Google’s top lobbyists, Andrew McLaughlin, recently got a job in the Obama Administration as deputy head of telecom policy. The scary implication, of course, is that now Google will get whatever the hell it wants because one of its former guys is now in a proper policy-making position. If only things were that easy.

So, basically, I’ve just said nothing other than that this Net Neutrality business can get really complicated if you want to devote the time to it. I stand to benefit more from a Net Neutral world, so I’m in favor of that, which is only logical. You’re free to disagree, of course. In fact, I encourage it! More opinions expressed = a better chance of coming to a well-informed conclusion.