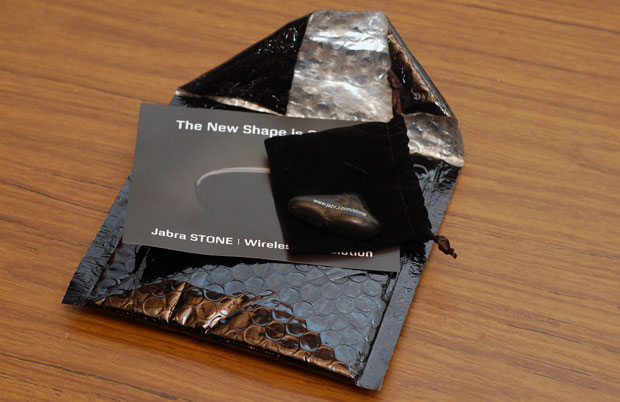 So I got home a few minutes ago, grabbed the mail and sat down to watch Michigan sneak a win over Indiana. I noticed a small, black package in the mail, but I didn’t care about it until I was sure that Michigan was going to hold off Indiana. After all, I thought, it was probably just another flash drive with some random press release on it. After Michigan intercepted the ball – and the call was upheld – I opened it up only to find a small satchel and a card that clearly showed the Jabra Stone teaser image.

Oh man, we’ve already seen what it’s supposed to look like but I didn’t think the Stone was suppose to come out for another couple of weeks, I thought. So I quickly opened the black pouch and was instantly disappointed. You suck, Jabra.

The black pouch held a stone. It wasn’t the headset at all. It was an eff’n rock with a website address engraved on it. Clever? Yes, but it’s also mean to do that to a gadget blogger. Jabra has always been good to us here and I thought perhaps they sent us the headset for an early look. But nope, what they sent us could have been a lump of cool. Ah well, it’s not like Jabra is developing a vaccine for AIDs, the Stone is just another Bluetooth headset and the world already has enough options in that department.