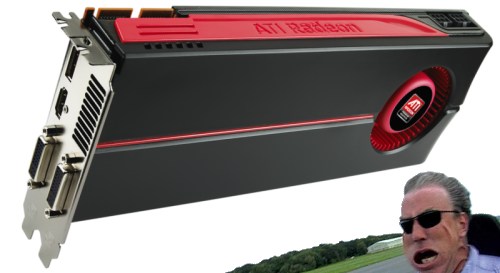 The more my games stutter and the more my HD content skips frames, the more I think about that wonderful day when I shall put together a beautiful new system with all new hardware. The trouble is that Intel’s got the processor thing locked down and AMD has the lead on graphics. I don’t really want to mix and match, but the pull of the Radeons might prove to be too strong. That new 5800 series is looking mighty fine, sir, mighty fine.

They didn’t drop all of a sudden as some hardware is wont to do, and the rumored specs have been around for a while, but of course, we don’t comment on rumors here at CrunchGear. Too much integrity.

The new flagship card runs at the same core clock speed as the old one, but it has twice the stream processors and texture units and a much-improved memory clock speed. Judging from the transistor count, it looks like the new 40nm process basically just allowed them to fit a huge amount more of the same stuff on the same card without worrying as much about heat or power draw. So this is less a revolutionary step and more a dangerously turbo version of the old 4800 series. 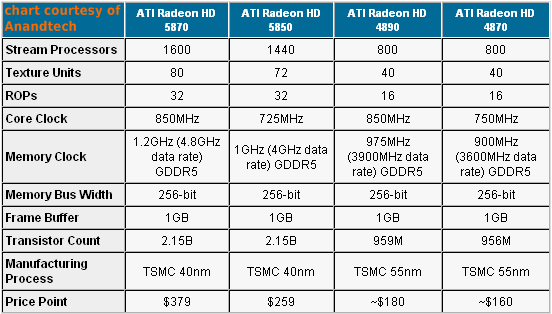 Of course, they’re also DirectX 11-compatible, and they’re at least working on making the most popular GPGPU protocols work with them as well. OpenCL and such, you know.

Anandtech’s review of the 5870 suggests that while this is certainly the fastest single GPU solution available today (for gaming and such at least), it’s not the leapfrog that was expected, and you can get more performance from putting a couple older cards into crossfire. At any rate, I’m not interested in the flagship models. The 5850 is the sweet spot: $260 MSRP for a huge improvement over the last flagship design, and you’ll probably be able to get it for much less once the novelty wears off and prices drop. Do I have my next video card picked out? Very possibly.

Update: The Inquirer has a pretty exhaustive list of reviews if you want to get dirty.