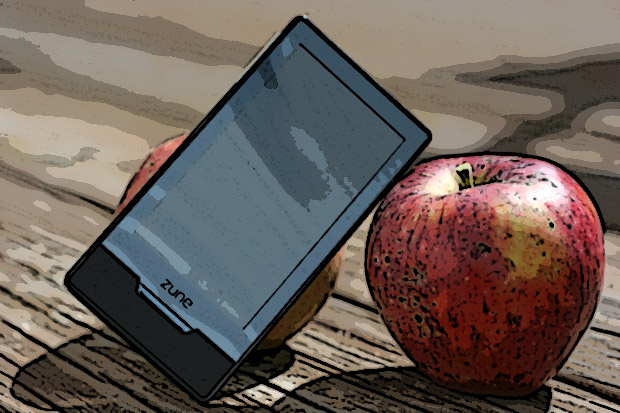 Get it, folks? (Also, non-shopped photo here, if you care. You probably don’t.)

While waiting for our music ban to kick in (again, you’ll all be receiving letters in the mail shortly detailing when and where you’ll be expected to hand over your music-related goods), I spent Thursday thinking to myself: “You know what I really want for some reason? A Zune HD.” Seeing as though I’m strapped for cash—you saw the lengths I recently went to in order to upgrade my three-year-old iMac—spending $236.79 for the 16GB model was definitely a decision I did not take lightly. (I actually had to calculate when my next student loan payment was due before I committed to buying the device! So if you think, as some of you do for some reason, that we’re “on the take‚” I can only reply: lol.) The thing is, I primarily use a Mac, and last I checked, the Zune software—which is great, by the way, and makes iTunes look like an old dog—only works in Windows. What to do? Sure, I have Windows all set up on a separate partition, but I really only boot into it when I want to play, say, Half-Life or Deus Ex for a little bit. That is, I had no intention of switching over to Windows full-time just to be able to use a Zune HD.

All that said, I’m happy (I guess) to report that using a Zune HD even though Mac OS X is my primary operating system really isn’t that difficult. Yes, I do need to boot into Windows to use the Zune software, but with a little forethought I can keep those boots to a minimum. The result is that I continue to use my beloved Mac OS X for my everyday computing, but now own and can use effectively what could be the best looking portable media player on the market today. 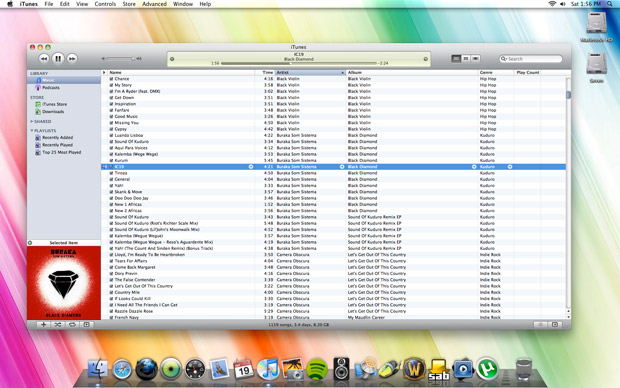 So what’s my secret? I use iTunes. Yes, yes, like Chris Jericho insists, I’m a total hypocrite. Not two paragraphs ago I slagged off iTunes, but the fact is that it’s the easiest way to organize music on a Mac. (I understand that Windows users tend to hate iTunes, but I’ve never used iTunes for Windows for more than two seconds, so I can’t speak to that.) The simplest way to put it is: I let iTunes organize all my music on the Mac partition, and then tell the Zune software to look at “/Users/nicholas/Music/iTunes/iTunes\ Media‚” for all its music needs. There’s a setting somewhere in the Zune software, something like, “Where is your music stored?” So I point it to that folder inside the Mac partition (I guess Windows 7 can read HFS+ partitions now), and then the Zune software adds it to its music index. It’s important to keep in mind that the Zune software never copies the music from my Mac folder to Windows, but rather builds an index that it uses to organize your music. 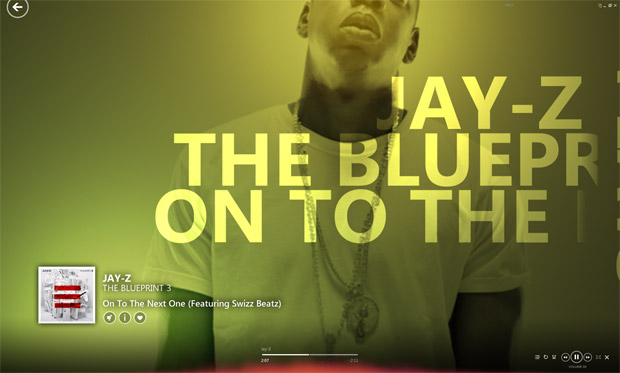 “Bottom line it for me, Deleon.” (Also, it’s “Deleon,” not “DeLeon,” as Newser wrote the other day. I also don’t write for “TechGear,” and yet somehow people accuse us of being sloppy!) OK, boss: I use iTunes within Mac as I normally do, and then simply tell the Zune software to look at the resulting, totally organized iTunes folder. That’s it.

What does this accomplish? For one, I can live in Mac completely as I normally do, making zero concessions or compromises, then boot into Windows occasionally to sync my music to the Zune HD. I don’t have two separate music libraries or anything, but rather the master Mac iTunes library, then the Zune software builds an index and syncs the music to the Zune HD based on said library. Is it an elegant solution? Maybe not, but it definitely works and is dead simple. What would be simpler? A Mac version of the Zune software, but I don’t see that happening any time soon.

Now, all of the above makes several assumptions. The biggest one, of course, is that you have access to Windows (maybe even Windows 7, I’m not sure about Vista or XP’s ability to read an HFS+ partition so according to that guy down there, we can thank Snow Leopard’s drivers for Windows’ ability to read HFS+ partitions, so presumably any Windows version that works with Bootcamp will be able to read your Mac partition). Those of you with a e-mail address can buy Windows 7 for only $30, so if the Zune HD even remotely interests you I’d say to seriously consider buying it. The second assumption is that, Windows in hand, you’re comfortable with installing it on your Mac and setting up Bootcamp. My guess, though, is that if you’re reading us here at CrunchGear you’re probably advanced enough to figure that out. If dual booting isn’t your thing, and don’t mind spending more money, you could simply install Windows using VM Ware or Parallels and have a Windows virtual machine at the ready for whenever you’re looking to sync your music. In my experience, after the initial Big Sync at the beginning, I rarely have to go back into the Zune software to sync; I’m not adding new albums every 30 minutes.

In any event, I hope this has shown to you that it’s not so difficult to live in a predominately Mac world, and still be able to use the Zune HD. Now I’m off to play World of Warcraft till I pass out. Thank you for your time.