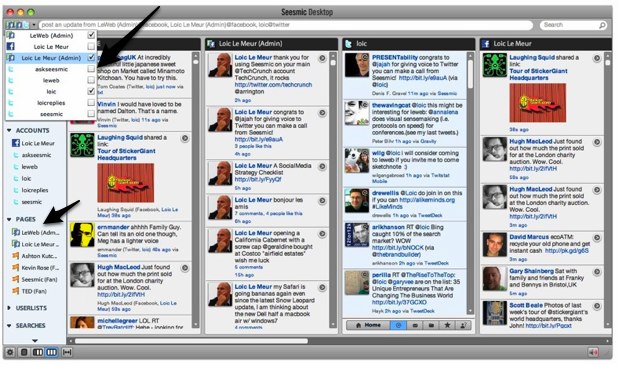 Seesmic, the startup behind the Twitter and Facebook desktop and web clients, is launching a new version of Seesmic Desktop that adds Facebook fan pages, yFrog integration, a “reply to all” button for messages and a favorites timeline. Developed by French entrepreneur Loic Le Meur, Seesmic recently launched its browser-based Twitter client at TechCrunch’s Real-Time Stream CrunchUp in July. You can download the new version of Seesmic Desktop here.

Seesmic Desktop, which launched in April and has reached 2.5 million downloads, is an Adobe Air-powered client that has pulls in status updates from Facebook and Tweets from Twitter in a real-time feed. Today, Seesmic Desktop is furthering its integration with Facebook by allowing users to access and manage Facebook Pages. Users can view and post to activity feeds from any Facebook page they are fans of and can also manage their own fan pages. Each Facebook Page will show up as a column, where you can post messages, and respond to comments and express likes, just as you would in a Facebook feed. If you’re an administrator of fan pages, you can post messages as the administrator.

I think the compelling part of this feature is Seesmic’s play in the enterprise space. It’s no secret that businesses are actively using both Twitter and Facebook as marketing tools and there have been a plethora of enterprise-friendly clients that help companies and brands manage social networking initiatives. Seesmic’s existing multi-Twitter user functionality and now the Facebook Fan Pages integration is definitely establishing the desktop client as a viable business application (as well as a useful consumer app).

Seesmic is launching a reply-all feature that lets users reply to all of the usernames listed in a message. This is useful when re-tweeting a message because the Reply-all function will simply Retweet the exact text of a message. Additionally, you can now add a “favorites” column to your interface that lets you mark and aggregate your favorite Tweets and messages.

Speaking of Seesmic Products, I spoke to Le Meur about his much hyped iPhone app, which is scheduled to launch in October. Le Meur was tight lipped about details on the iPhone app’s features, but he did say that the experience on the desktop, browser and mobile versions of Seesmic will be the same. That means that the app will probably be integrated with both Facebook and Twitter. He did mention that the browser version of Seesmic will be integrated with Facebook within the next month as developers are currently tweaking the application’s functionality on different browsers. I’m a big fan of Seesmic’s web-based client, particularly because of its Gmail-like interface and the avoidance of using a desktop app built off of Adobe Air, which is buggy.

Seesmic faces competition from PeopleBrowser and rival Tweetdeck, which recently added MySpace functionality and a number of other features.

Disclosure: TechCrunch editor Michael Arrington is an investor in Seesmic. I am not.