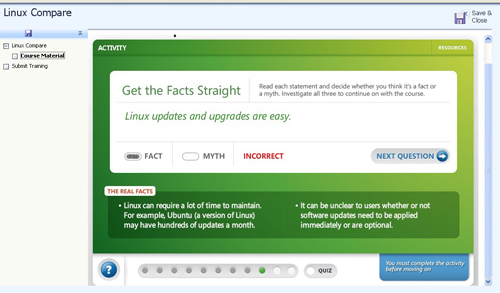 Microsoft, will you stop at nothing to protect your hegemony? Your “Linux Facts” campaign from a couple years ago was poorly executed, and trumped up a bunch of selective information to make Windows look better than Linux. You killed that, and replaced it with a Windows Server “compare” site, but it’s still a bunch of selective data points that don’t tell the whole story. Now, you’re even trying to get the sales drones at Best Buy to steer folks away from Linux!

Leaked memos are making their way around the Internets today, revealing what claim to be Microsoft propaganda attempting to “educate” Best Buy employees on all the problems with Linux. For each problem, Microsoft suggests that their products are vastly superior!

Here’s an idea: instead of spending so much money on advertising, why not make a better mousetrap, rather than re-introducing ancient bugs?