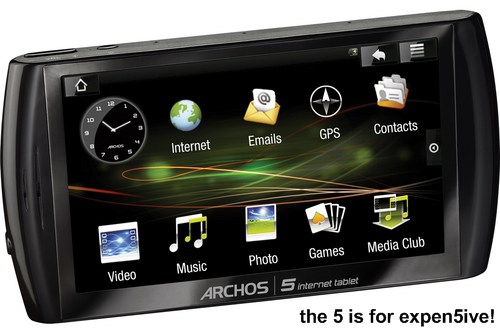 It’s… almost exactly what I would expect from an Archos-branded Android tablet. We saw it before via the FCC, but this is a much clearer picture. The device will be coming in four (if not more) flavors: two flash-based at 16GB and 32GB, and two HDD-based at 160GB and 500GB. It looks like a decent little device, but I don’t think I’ll ever understand the draw of this sort of device. If a nice Android-based phone does 85% of what this tablet does, what’s the point of this? A slightly bigger screen? More storage?

There’s a lot of speculation going on over at Archos Fans, from which the images originate. The pricing was also noted as follows:

My my, pricey! But Archos has never been into budget electronics that I know of. For that price you’ll probably be able to Get a CrunchPad.