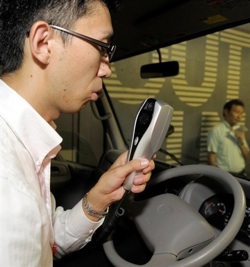 Help me understand this. Toyota today announced some sort of anti-drunk driving “gadget” (more like a complete system, including a digital camera and a breathalyzer) that prevents a car from being turned on if it detects a certain amount of alcohol in your system. You know, to help reduce the number of drunk driving-related accidents, which in the U.S. caused nearly 12,000 deaths last year. That’s one death every 45 minutes.

And yet, all too predictably, there’s a certain segment of the population who claim the system will fail because it infringes upon people’s freedoms.

Here’s a sampling from Breitbart:

Sure way to lose American sales.
We like our freedom, not dictates.

I don’t drink & drive, but I’ll be damned if Toyota, or any other automaker is going to dictate to me.
There will be a good business on technicians who override these systems.

Time to properly install one of these devices…. about 4 hours

Time to bypass the device…. about 10 seconds

Yeah, lets just put the cop inside the car with you! Blow an illegal limit, the doors lock and the alarm will go off if you open them. Take this gadget and jam it up your Japanese arsh!

I literally laughed out loud at the “NAZIS” barb. Not even Godwin would have predicate that. (On a side note, can anyone point me in the direction of a book or paper that describes Nazi Germany’s policies with respect to drunk driving?)

Granted, this reaction is to be expected when Drudge is involved. (He linked to the Breitbart version of the article.) That site attracts a certain reader, let’s say. The kind that likens still-in-draft bills with the death of the American way of life—whatever that is—itself.

I mean, what does this gadget do, exactly? It detects if you’re drunk. If you’re drunk, however that’s defined in your local jurisdiction, you should not be driving a car, full stop. End of discussion.

And yet, people will bleat on about their “freedoms” being violated. Driving drunk is not some noble exercise of your freedom, but rather is an example of needless (and senseless, but there doesn’t seem to be too much sense there to begin with) recklessness. Do not confuse an ability to vote in elections and participate in a democratic republic with your ability to careen down a highway, killing a perfectly innocent person, or persons, in the process.