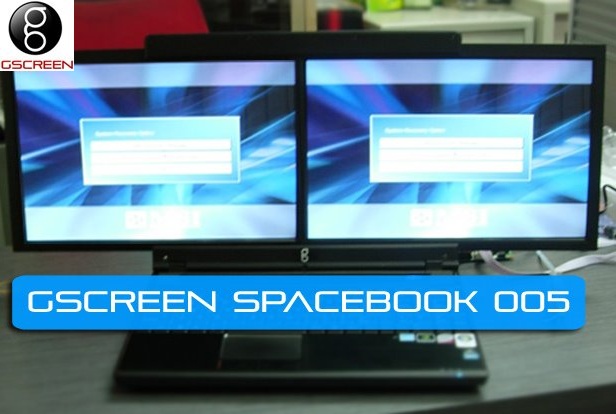 How insane is this? I guess I can understand the desktop replacement laptop, but at some point you have to say it’s kind of ridiculous. Are they going to start installing wheels and seats on laptops and have them be “automobile replacement” devices? Maybe a kitchen PC with a built-in milk frother!

The gScreen Spacebook has two displays that slide out to form one large one; the displays are 15.4 inches each, so let’s apply the old Pythagorean theorem to find that root (15.4²+15.4²) = a 21.8-inch display. Is that right? (no, it’s not.) Actually the two 15.4-inch diagonal screens combine to make a 24-inch 1.78:1 screen. Would be nice for watching widescreen movies except for that big bar in the middle.

There will be larger and smaller versions; I can actually see the draw in a slightly more compact version of this sucker. That is, if they can keep the weight down. They’ll be releasing the things in Q4 of this year; you should be able to buy on on Amazon in a couple months. We’ll let you know.