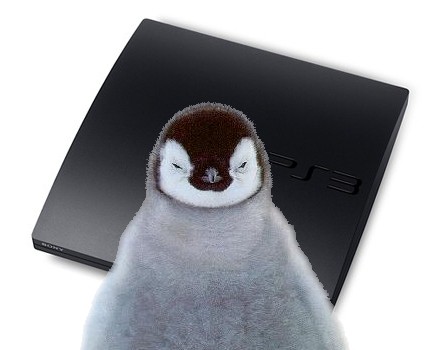 I’m as ticked off as you guys at Sony removing the “install other OS” option from the PS3, but really, who are they kidding? Removing the ability to install Linux on something is like writing “HACK T3H PS3 SLIM” on the moon. So you can’t select a menu option? Don’t make me laugh! Linux fanatics would install it on their TI-83s if they could (and probably have). Mark my words: the PS3 Slim will have Linux running on it within a month of its release.

I don’t think I’m taking a lot for granted here or overestimating the community. Hackers and Linux lovers do this for fun. They do this on Sunday afternoons to relax. The first hack will rely on cracking the thing open. They’ll piggy-back off that with a savefile hack or something, and after that it’ll be something you can put on a USB stick, the way it is now.

Seriously, Sony removing that option will have about the preventative strength of putting up a sign that says “keep off the grass.” Am I right?

Unfortunately, the same can’t be said for PS2 games. I was hoping there’d be a Slim Plus or something version that did PS2, but no. Tarnation!