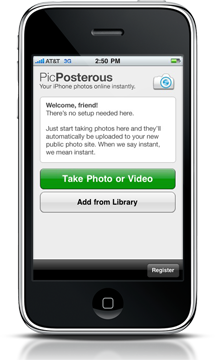 We’re big fans (and users) of übersimple microblogging service Posterous here at TechCrunch, and I’ve been eagerly awaiting the day that the young upstart would finally come out with an iPhone app. Frankly, needing to go to the camera roll on my iPhone and e-mailing in pictures I wanted to post on my Posterous blog every time had become a little tedious.

Now Posterous co-founder Garry Tan just checked in to let us know the iPhone app that had been submitted about 15 days ago has finally been approved by Apple and live in the App Store (iTunes link).

It’s not that the app, dubbed PicPosterous, doesn’t do what is advertised on the product website, it’s just that I wish it did a little more. Billed as ‘Your iPhone Instant Camera’, you can basically use the iPhone 3GS’ camera to shoot both pictures and videos, which you can subsequently add to virtual albums and upload directly to your Posterous blog.

When you log on to the app using your registered Posterous account (which you don’t necessarily need to have to use it), you can manage multiple sites, create private albums and auto-post whatever you upload to your Twitter, Facebook, Flickr and FriendFeed stream.

The app is capable of geo-tagging photos and videos, so you can switch on a location map online next to each album. The nice thing about it is that you can add a first picture to an album and then simply keep uploading photos to that album for as long as you like, so the pictures are not each posted as a separate blog post when you send them in.

A couple of gripes though. First, when you send pictures or videos to your Posterous blog, it’s impossible to add any kind of text or link to the body of the post from within the app (something I was able to do when I simply e-mailed in photos I took with my iPhone camera using the mail application). Second, when you add multiple pictures to one album you can’t delete individual pics afterwards, leaving you only the option to clear the entire album and start over. Third, you need to use your iPhone camera in landscape mode when you want your pictures to come out right on your blog, something that’s not indicated anywhere and you need to find out yourself (update: apparently, it auto-corrects but only after you sent the link to the badly oriented photo to your Twitter, FriendFeed etc. stream). And finally, while you can turn off the auto-post feature, it would be nice if you could get the option to send it to e.g. only your Twitter or Flickr account rather than all or nothing.

Great to finally see Posterous come out with an iPhone, but I sincerely hope they keep improving it based on my and other users’ feedback to make it as satisfying an experience as the actual web service.