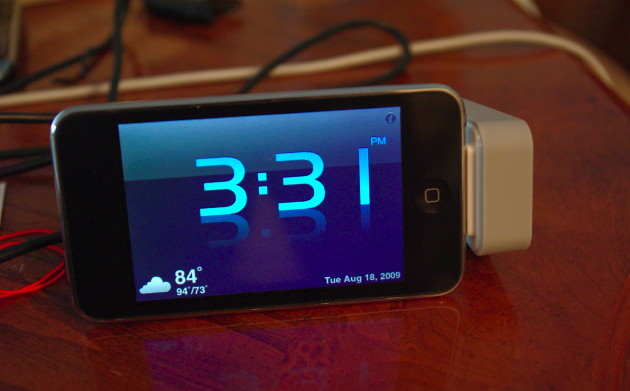 Short Version: If you’ve never purchased a charging dock for your iPhone or iPod Touch and you’re without an alarm clock then the Kensington Nightstand is a perfect alternative for you, friend. Being able to check on the weather first thing in the morning is an added bonus. The $40 price tag might give some of you sticker shock considering the Rise & Shine app is free from the App Store, but a quick look around to other iPhone/iPod accessory vendors quickly reveals that the Nightstand is actually a good deal. If you’re looking to buy a charging dock that is.

I won’t lie; my gut reaction was that the Nightstand wasn’t worth $40. I mean, the Rise & Shine app works without the hardware and any number of combinations would allow me to recharge my iPhone while I slept. But the more I thought about it, the more it made sense. If, and only if, you didn’t already own a charging dock of some sort for your iPhone or iPod Touch. Some may argue that the tiny brick provided by Apple with the purchase of a new iPhone is sufficient enough, but we could go in circles on that one.

The point is that the Nightstand does a good job of converting your iPhone into a nightstand and works great with the Rise & Shine app. It even works in portrait mode but it’s not as stable when it’s standing straight up. To accommodate those with cases, Kensington extended the connector, but there’s no way of knowing which cases it will and won’t work with.

But is it really worth $40, which includes the dock with a USB cable attached and an AC adapter? I’ll leave that up to you to decide.